What’s been happening in The Dunies camp lately? Quite a bit, it turns out.

With their third album Hurry Up And Wait providing the backing track for many backyard beer/bong sesh around the country, and their huge tour with Ruby Fields, Dear Seattle and Totty kicking off at the end of the month, we thought it’s about time we check in with Dune Rats.

Attacking 2020 with the ferocity of a stoner versus a packet of Doritos, it’s nice to see that not a lot has changed with Australia’s most unlikely chart-toppers. Churning out sing-alongs that you can’t actually sing-along to in areas where children are present, playing shows around the world and partying loads – in Dune Rats we trust.

Check out the words straight from the horse’s (AKA Brett Jansch’s) mouth below and head here to score yourself tickets to the Hurry Up And Wait tour (dates below):

How have the Euro shows been? What was the craziest thing that happened on the tour?

The tour was epic, short but sweet.

Were you playing unreleased tracks on the tour?

We haven’t played any of the unreleased songs on the tour apart from in sound checks, we’ve found people usually just stand around confused if they haven’t heard them so we’re pretty psyched to give them a crack on our tour coming up.

What’s changed since ‘The Kids Will Know It’s Bullshit’ musically?

We didn’t really want to make the same album twice but we also didn’t want to go too far from what our band is. We kind of just bashed around for a year and this is what we came up with. Pretty stoked.

Tell us about the title of the record. Was there any pressure on you guys to rush it out?

We actually finished this album about 11 months ago and tweaked it for ages so we took our time with this bad boy.

Did you feel pressure with the last album debuting at number one?

We never thought we would get to number 1 but when we found out it was getting up there we gave it a bit of a nudge.

Have you been sitting on these songs for a while? What’s the most frustrating part about knowing you’re sitting on gold and can’t share it?

Yeah, 11 months we finished the album. It’s been a bit annoying not being able to put it out and tour straight away.

What’s James Tisdwell like to work with? What did he bring to The Dunies’ sound on this record?

He’s a legend, we’ve known each other for years and or was awesome getting someone who knows us and our band inside out to get on board as almost a 4th member in the studio. He brought a few acoustic elements out and basically was a champion is helping us stick to our guns with the album we wanted to make. He’s a full fucking legend and can’t thank him enough for being apart of it.

Are there any tracks on the record that are going to surprise people? Piano ballads?

Haha nope. Actually maybe one called “the skids”, we showed James all the demos and this was the last one we played him/ almost didn’t play him. He fucking loved it and thought it should be the main track. It ended up I’m the album and is almost like a country song or something haha.

Any crazy on-stage plans for this tour that you can let us in on?

It’s fucking sick the show we have planned. That’s about all we can say

There’s a lot of all-ages shows on the bill for this tour. Does that change how you go about things on stage?

Not at all. We loved Eminem and Blink 182 and shit when we were young, I felt like if they made it safe for all people it would just be boring as fuck.

What are you most looking forward to about this tour? 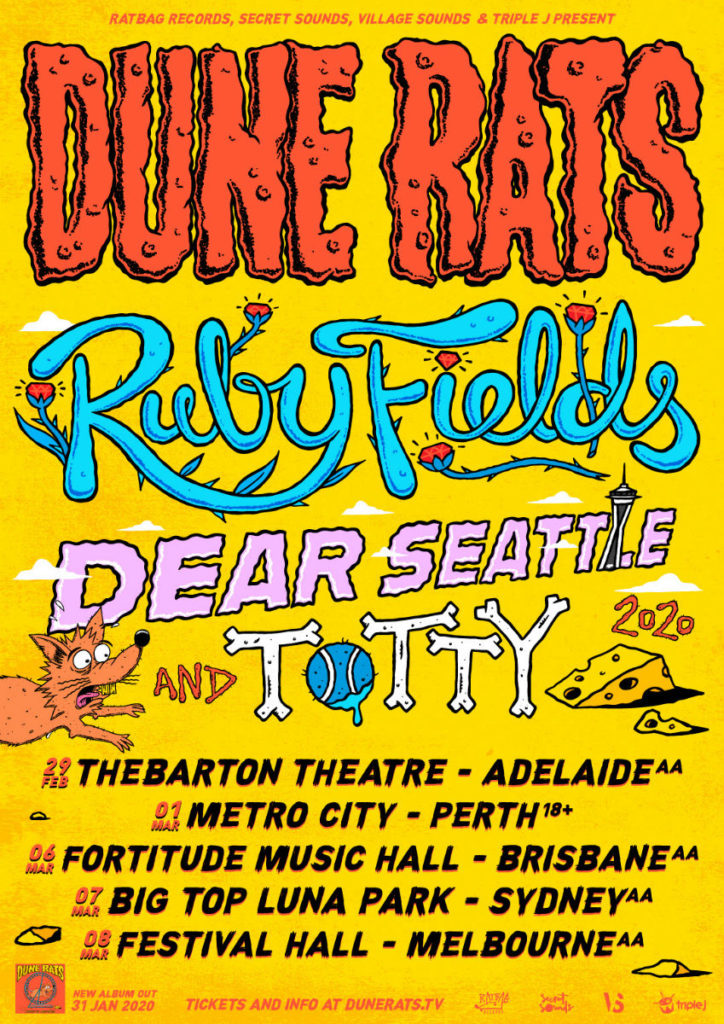 Share this
Interview: Dune Rats Spill The Beans Ahead Of Their ‘Hurry Up And Wait’ Tour