Narla take things in a dark direction with ‘Am I Sane’ – the first taste from their forthcoming debut album.

Having built a reputation as one of the most exciting and intriguing bands getting around town, Sydney trio have delivered a video that only furthers that mystique and cements their standing as masters of pull/push energy. ‘Am I Sane’, which was recorded live and to tape, is seven minutes aural delight and tension that lures you right in then slaps you in the face with a wild and chaotic outro.

Shot by Matt Maule, the video also is something of an anxious ride as we follow the band through shady bars, deserted forests, and eerie campsites with an undercurrent of darkness that makes it feel like a some sort of redneck horror film. It’s a gritty ride in which you don’t know who’s allied, or who is fighting for it solo, or what “it” even is – just watch and make up your own mind.

Narla will be hitting the road for an East Coast tour to celebrate the release of ‘Am I Sane’, hitting Brisbane, Melbourne, Wollongong, Sydney, and Newcastle over January and February with support from Kimono Drag Queens (info here). Check out the dates below and stay tuned for their debut album, which is expected out later this year. 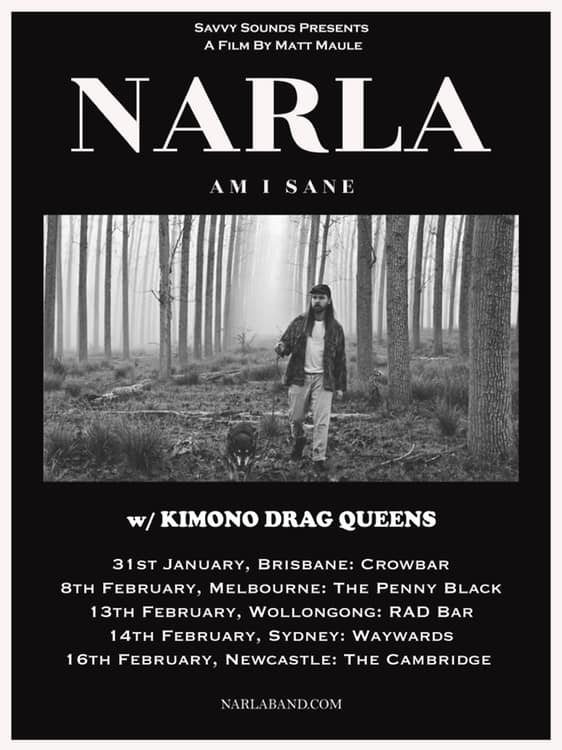 Share this
Video Premiere: Step Into Narla’s Redneck Underworld In ‘Am I Sane’ Clip