A ragtag crew sailing through open water encounters an abandoned shipwreck – where do I sign up?

You know that feeling when you’re reading or watching something, and you sense the world is about to come crashing down on the characters? That’s the feeling we get reading the debut graphic novel from Aaron Harvie and Chris Badenoch AKA Badharvie (see what they did there?). It’s called The Straits and it’s bloody awesome.

Set in 1984, the 100-page story – and this is only part one – follows a crew of sailors, divers and engineers on a mission to recover the wreckage from a sunken Dutch trade ship. Led by Captain Abe Quinn, with the watchful eye of the ship’s corporate representative Donald Weeks everpresent, the crew have stumbled across a hornets’ nest that they don’t even know they’re kicking.

It’s got all the ingredients of a classic horror story with an eerie air from the get-go and a simmering tension between the cast that is waiting to bubble up and amplify that shit-hitting-fan moment. It’s hard to know exactly where the ship is headed but you can rest assured that it isn’t going to be pretty.

Aside from the awesome graphics and nail-biting story, one of the coolest features of the graphic novel is that it’s littered with mock ads for stuff like kooky cults, Bay of Pigs figurines, and cigarettes, with Harvie and Badenoch completely immersing readers into the vintage-flavoured Badharvie world. It makes the ride so much more entertaining and cool, even if it leaves you stinging for a delicious filtered ciggy.

We caught up with the Aaron and Chris to get the low-down on what it’s like creating a graphic novel. Check it out below and head here to get your copy of The Straits. Oh, and grab some of their rad merch while you’re there! 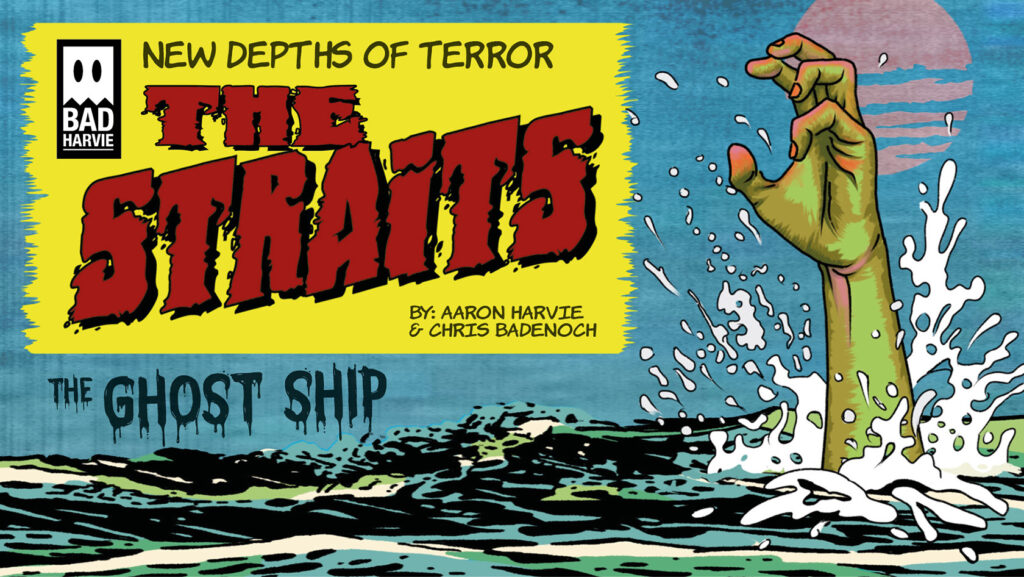 Firstly, congrats on ‘The Straits’, it’s an anxious ride! How long did it take you to pull it all together?

All said and done it was around a year, which isn’t bad considering we’ve never done this before, and we totally underestimated the sheer volume of work involved. The fact that Chris was away filming Masterchef for a few months in the middle of it certainly didn’t help speed things up!

You guys live in different states, right? Was not being in the same room during the writing process difficult?

We live on opposite sides of the country – Aaron is in Sydney and Chris is in Perth. Aside from the time difference it really didn’t affect how we work; between phone calls, Google Drive and emails it’s not too hard to collaborate.

You’ve mentioned John Carpenter and H.P. Lovecraft as influences, how did these two (and any other major influences) shape what you intended to write?

I think it’s a prerequisite to be a fan of John Carpenter if you work at Badharvie!

Both Lovecraft and Carpenter are masters of their craft and they influenced us both in our formative years, so that really guided our tastes in the Horror/Sci-Fi genre. And let’s be honest, they are brilliant.

Is any of the stories based on real events or known myths?

That’s a question we’ve been getting from our readers! It’s loosely based on a real story that happened in South East Asia about fifty years ago, sans all the crazy supernatural stuff obviously.

In terms of the drawing, who are the big inspirations behind Chris’ style?

Both of us really agreed from the start that we want this Graphic Novel to have a real EC Comics feel to it so that was the major influence in the illustration style. Plus we are huge fans of Wallace Wood and Bernie Wrightson from that era.

The deep sea is obviously a great setting for horror, with characters often in desolate locations, constantly surrounded by watery death. What other reasons did you have for choosing this setting?

The sea is a great setting for a horror story. You can convey that feeling of isolation and helplessness, the sheer terror of being stranded in the middle of the ocean. But it’s the fear of the unknown that really intrigued us, what’s down there below the surface, that’s probably the most powerful aspect because it’s a totally alien watery world down there and anything could be waiting for you.

You’ve created a real meta world around the story with the vintage ads and propaganda which is equally as cool as the story. How did forming this universe help with the writing process? Did it help you get in the zone?

Researching those old comic book ads was one of the most fun parts of the project. We wanted to create an immersive world for our readers, build a little micro-universe with its own products and brands that characters could use and we could cross over into other titles. The problem was we had so many ideas we could only use a few of them in the first issue, but rest assured we’ve got some awesome stuff in store for part 2.

The graphic novel feels very filmic, if I were to throw a few million bucks at you, who would play Abe, Harrold, April and Donald?

It’s funny you ask that. We wanted The Straits to have that 80’s low budget horror film vibe so when we were developing the characters we held a kind of virtual casting session of sorts, picking actors from the 80s for the parts. I think it was Michael Ironside as Abe, Wilford Brimley as Harrold, Elizabeth Shue as April and Ronny Cox as Donald Weeks. And Kurt Russell was definitely the inspiration behind Frank, but these days we’d be equally happy with his son Wyatt. Actually how about we cast the progeny of all those great 80s actors in the parts as a loving pastiche to the era?!

What advice would you give to someone who has an idea and wants to make a graphic novel of their own?

DO IT!! It’s a lot of fun and very rewarding but be warned, it is a hell of a lot of work. Do not underestimate that.

You left us readers right on a cliffhanger (thanks a lot!) and there’s a lot of tension between the crew. What is in store for the crew in the next chapter?

It only gets worse! Without giving too much away we truly feel sorry for what we have in store for the crew… it’s horrible! Part 2 of The Straits, The Terror from Within, is in production now and will hopefully be out by the end of the year. Till then keep your eyes out for our upcoming comic series Frankie’s Drive-In which features two grindhouse movie style short stories in each issue. The first comic is an Ozploitation Double Feature filled with thrills, chills and kills… it’s going to be awesome!

Share this
We Chat 80s Horror, EC Comics And Watery Death With The Duo Behind Epic Graphic Novel ‘The Straits’