Made up of AJ The Aged One, Diggesy, Dives, Jermango Dreaming, Afternoon Jack and his pumpkin patch, Yeah Nah Yeah is an artist-run label and events collective with a reputation for throwing some of the best parties in Sydney.

As well as specialising in having a good time and hosting a number of (admittedly hazy) nights to remember, Yeah Nah Yeah also whip up very danceable tunes of their own. And if you haven’t had the pleasure of soaking in a late night art, music and dance session at one of their showcases over the last few years, now is your chance with a new YNY event series set for liftoff this Friday night at Yulli’s Brewery, Alexandria. The Limbs Sessions are getting underway with sets from Honey Point DJs, Setwun (live band), DJ Dives and Disky Dee B2B. Head to the event page for more details, and read on to get familiar with some of the best in the party biz below:

How did you all meet and when did that evolve into the party-throwing, record label-running, tastemaking collective that you are today?

There are five of us in the group. Myself [Andy] and Matt have been friends since our earliest memory.  Then in year four Matt moved to another school where he met AJ and Jermaine. I met them for the first time in year five at monster skate park. From that point on we were all pretty inseparable, hanging around Burwood Westfield and getting kicked out out of movies for throwing popcorn around to impress plc girls. Josh was in the year above the guys. After we got thrown out of the vortex that was puberty and left school, Matt, and AJ started playing in King Colour with Josh. Josh had a rep at the time for being a seriously good drummer (if you don’t believe me check out Drumpro712 on YouTube), so they got together and started making music. After a couple of trips to Falls in Byron and summers of skating, jamming and hanging out, we decided on one holiday away that we wanted to start going to parties that were inclusive and had music we liked with art and things to keep you occupied. We also had so much music that we were working on together that it seemed only right to set up the label to support it. So we decided to start the label as a way to distribute the music we were making but also to create these events which we craved. The two work together really nicely and have allowed us to really dive into the creative side of Sydney.

How did you land on the name ‘Yeah Nah Yeah’?

We brainstormed on names for a while. We just wanted something that felt colloquial and within the language of our audience, so when Jermaine mentioned Yeah Nah Yeah we all felt it fit perfectly. 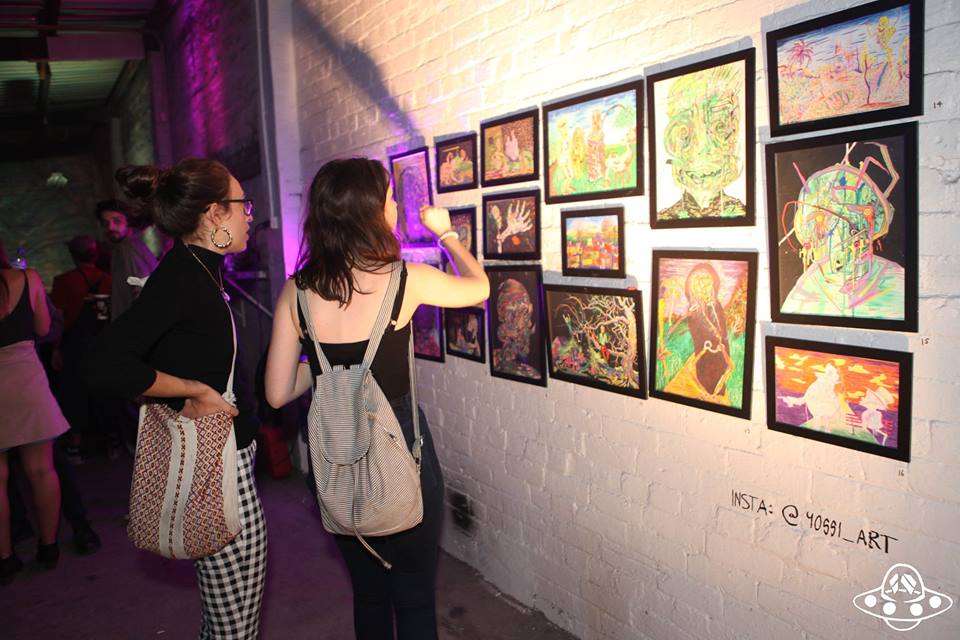 What’s been happening on the label side lately?

It’s a pretty exciting time with the label at the moment. We have all spent a fair bit of time writing new music and preparing some new acts. Dives has a release out the first week of November called infinite bliss that is going to really blow minds. Jermango Dreaming has been writing banger after banger and has more to come in early 2020. We also have a few new acts that I won’t reveal too much about just yet. One moves in a new wave direction, whilst another is more introspective beats and beautifully quaint guitar lines. So the next six months will see a lot to come. We also have Disky Dee and Dj Dives making a name for themselves in the Dj scene which is great.

Over the years you’ve hosted your fair share of big nights, can you share three of your favourite YNY memories?

They are always pretty wild nights with twists and turns that always end with a happy ending – similar to a Harry Potter book really. Well, not number four. That one ends pretty rough for Cedric.

We had our first legit warehouse party in this really dingy old mechanics garage in Canterbury. Our initial warehouse bailed on us 24hrs before the party so we found this one on gumtree the night before. It was pretty cheap to rent and the guy who owned it just gave us the keys and said he would see us in 24hrs. It was far too much trust from him. Seeing as it was one of our first legit  parties, we were still finding our feet on how to properly run them. The building was next to a church which was pretty wild and lead to it at times becoming a bit of a grave rave – the caretaker of the church came to the party at 8pm when it started and didn’t leave til 5am. SCK CHX and Sloom played some wild sets and then things just kind of got out of control. The five of us decided to do the door job together, as well as run the bar and do sound and security. That was biting off a bit more than we could chew. The bar somehow ended up flooding and the next day we found all our money inside a pencil case amongst the flooded room. Most of the time no one was on the door so people were just walking in pretty freely, then somehow the door fell off the hinges and a guy was walking around the party dancing with it (later that same guy fell asleep sitting behind the drum kit whilst 300 people danced around him). When the party was over we simply rested the door against the hinges and left. The next days clean up was one of the grimmest things we have ever done. But it was a good learning experience.

A real standout musical moment was when Horatio Luna played at our last party. We knew Henry and the crew would bring the goods but they blew us away with their set which commanded the full attention of the 300 strong room – which is really hard to do in a warehouse.

There was also the moment that Earl Gray dropped Blue Monday on the dancefloor at 3am and the room collectively felt feelings of joy. That was pretty special. And you’ve got a new event series incoming. Tell us about the Limb Sessions.

We are really excited about the Limbs Sessions. Our focus is the exploration into movement and rhythms from some of Sydney and beyond’s most innovative tastemakers – both live bands and DJs. It’s a chance to boogie and just relax on a Friday arvo as the sun dips behind the horizon. It will be a roaming party that will go here and there but always with the goal of exploring sound within a space that feels safe, friendly and relaxing. It’s about having fun in space without judgment.

On your site, you likened the lineup to a three course feast. What entree, main course and dessert do you think best embody Honey Point DJs, Setwun, and DJ Dives & Disky Dee, respectively?

For Entree we have honey point who are two taste-makers with their fingers on the pulse. They are relevant, they are trendy, they are now, so they are – a shot of pumpkin soup in a crystal glass with light infusions of cream, pepper cracked so finely that you need a magnifying glass to see it, and salt carved from Mount Everest.

Setwun is a wealth of knowledge and class with musical prowess that is like no other. Put him together with the talented musicians playing live with him and it is the main course that is an authentic and fine dining experience. So I would say 10 hour slow cooked pulled pork on a lightly grilled brioche bun with homemade coleslaw hand-picked from the finest slaw farms. To top it off there would be zig zags of kewpie mayo and sriracha kewpie. Add pickles to your liking.

Dj Dives and Disky Dee are two selectors who in their own right create sounds of bliss and dance exploration. They work well alone but together become something so much more. With that in mind they are cookies-and-cream ice cream, with a light drizzling of ice magic and diced raspberries which create a slight citric balance that seems unusual but feels oh so right. 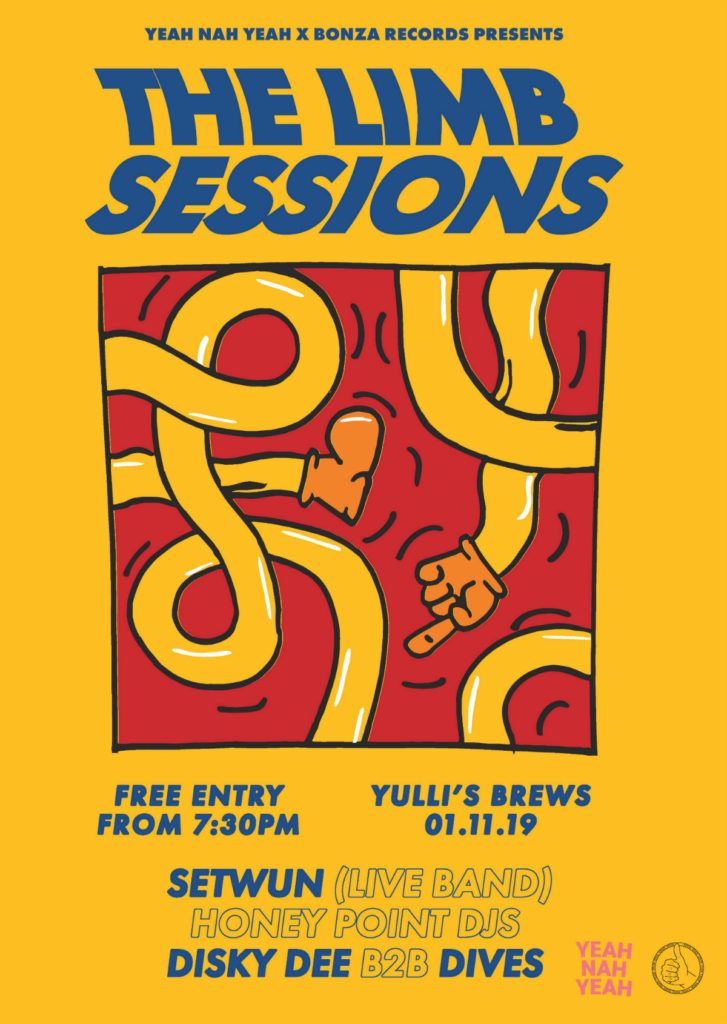