The time the rain led us to dancing in a defunct jail: Omar S @ Summer Dance 2015, National Art School, Sydney

The very first Summer Dance went down in January 2015 headlined by the Detroit don Omar S. The whole idea behind the Summer Dance concept is dancing under the sun but, with our luck, the series was never going to begin that way. Instead, we were hit with another rainy day to kick off the series. Due to the weather we had to move the party indoors on the NAS campus, so we ended up hosting it inside the Cell Block which is actually the old women’s wing of the now-defunct Darlinghurst Jail, and how often do you get to dance in a location like that? Local Sydney legends Kali and Simon Caldwell opened and Omar S closed the day playing his anthem ‘Set It Out’ with all the lights on and every dancer going absolutely crazy … what a memorable way to kick off the Summer Dance series, now wrapping up it’s 5th season!

The time we swam at sunrise: Last Dance 2018, Wollongong

Last New Year’s Eve we hosted our inaugural Last Dance NYE party with our leisure coast pals Yours & Owls. It was hosted on an old racing track in Bulli right near the beach with two stages featuring some of our favourite DJ’s including Motor City Drum Ensemble, Mall Grab and Moxie. The main room looked more like a boxing ring than a live music stage, with a huge 360 DJ booth in the middle of the crowd. I tackled my first ever fence jumper that night and we all went to the beach after the party to have our first swim of 2019 as the sun came up and it was pretty magical. Keen to plan NYE 2019!

The time we brought our favourite international party to Australia, on the wettest day of the year: Mister Sunday 2018, Belmore Park, Sydney

Mister Sunday is a New York party institution and hands down our favourite party in the world. We’ve been attending their parties for about 8+ years now and they never get old. We’ve been working with the Mister Saturday Night masters Justin Carter and Eamon Harkin for a long time now and I remember the first time I met them 8 years ago, I told them that I want to bring their Mister Sunday party to Australia. Last year we finally did that. I’m not going to lie it was a pretty scary party to put on considering it was at a venue which has never been utilised for a party (Belmore Park) and the party fell on one of the wettest Sydney days in years (we’re talking 3 months worth of rain in just 24 hours!) But the show went on and Justin and Eamon played all 6+ hours. It was one of those parties where the old saying goes, ”if you were there you know”.

2014 was our second year throwing a Vivid Party in the Sydney Opera House Studio and we got to put together a bit of a dream line up. We saw that acid pioneers Phuture were reuniting and never made it to Australia before so we decided to make it happen. On top of that, we brought back our favs L-Vis 1990 & Bok Bok aka Night Slugs and booked some of our fav AUS artists like Rainbow Chan, Andras and Ben Fester. We got our friend Lenny to design a huge sculpture backdrop made out of hundreds of CD’s for the main stage and also put together a crazy laser show. On top of all of that, we had a secret special guest play… Giorgio Moroder stepped up and DJ’d some of his classics. R.I.P. Spanky.

The time we moved an outdoor party inside to one of Sydney’s classiest venues: Soulection: The Sound Of Tomorrow 2017, Pier One, Sydney

For some reason, chances for rain are high in Sydney whenever we plan an outdoor party, and Soulection was no different. We were originally meant to host the Soulection family of Jarreau Vandal, SOSUPERSAM and Lakim on the wharf of Pier One but due to rain we had to move it inside to the hotel’s very upper-class function room which they usually use exclusively for ballin’ weddings and corporate events. It ended up being an extremely fancy affair; picture a glass room with billion dollar views of the harbour, filled with a mob of kids moshing to rap, soul, house and R&B. Safe to say there’s never been a party open to the public like that ever again hosted at this venue.

Rain, hail or shine Astral People certainly know how to have a good time. Keen to squeeze out every last drop of Summer? Tickets for this season’s final instalment of Summer Dance are available via the link. Here’s to five more years. 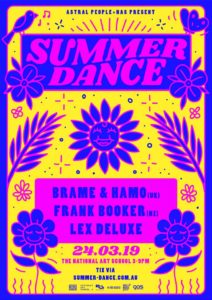