There’s no doubt Maccas Big Mac sauce is delicious to say the least, being a staple in all of our childhoods. It’s no secret that Maccas are fully aware of this, turning the infamous sauce into a bottle and even uploading a video to youtube to explain the recipe (It’s racked up more than 6 million views and tbh we’re surprised it hasn’t clocked more). But even the fast food giant wouldn’t have the gall, the audacity, to charge $114 a bottle. A seller from Claremont in Tasmania however, does.

Describing it as “the latest edition of the infamous Big Mac sauce”, the seller makes Jordan Belfort from The Wolf Of Wall Street look like a total amateur, stating that “three individual 25ml dipping tubs could be yours exclusively available at $114 each”. I mean its a total bargain right? Who can argue with that? But surprisingly, it seems the seller still hasn’t managed to sell the sauce tubs since 2018 when they posted the ad. Clearly no one sees the value for money they’re getting with a $114 price tag.

To be fair though, last year a limited edition Coles collectable, the Golden Billy Banana (DM us if you’ve got it, we’ll make it worth your while) sold for a whopping $20,100, so I guess people will pay anything to get their fix. 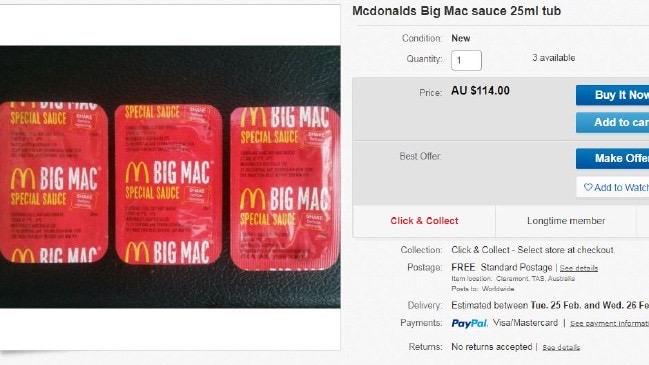 Share this
Would You Pay $114 For Maccas Big Mac Sauce?