Who needs them anyway…

Billie Eilish definitely cops way more shit than your average 19 year old. Literally everything she does is placed under a huge microscope, and she’s constantly subject to criticism. But she’s managed it like a total G, taking a back seat on social media and tuning out all the bullshit while focusing on just being an artist. However, recent weeks have seen her return to IG in a blaze of glory, interacting with her fans and giving us a deeper insight into her life. Yet, that seems to have backfired now, with a couple of pics she shared on her stories prompting over 100,000 fans to unfollow her on the social media service.

Following the classic ‘Show me a picture of’ trend, Eilish posted photos of her dogs, selfies and her reaction to watching her own documentary for the first time. Then, she was asked to share a drawing she was proud of, prompting her to share a sketchbook with drawings of nude women, which a bunch of followers seemingly found inappropriate (what are you 80!?).

Thus, her follower count went down from 73 million to 72.9 million (it’s back to 73 million now cause she’s just a total boss). But of course, Billie didn’t give a flying fuck, calling those who were offended by the drawings “Babies”.

It’s actually so whack, literally everything she does cop huge flack and she’s pressured to censor herself and sexuality as a result. She’s also pointed out the astounding double standards she faces as a woman in the industry, which also then criticised for. It seems she can’t win, but luckily she’s risen above it all, and doesn’t even need fans that are gonna be shitty to her like that.

Check out the drawings that started all of the drama below. 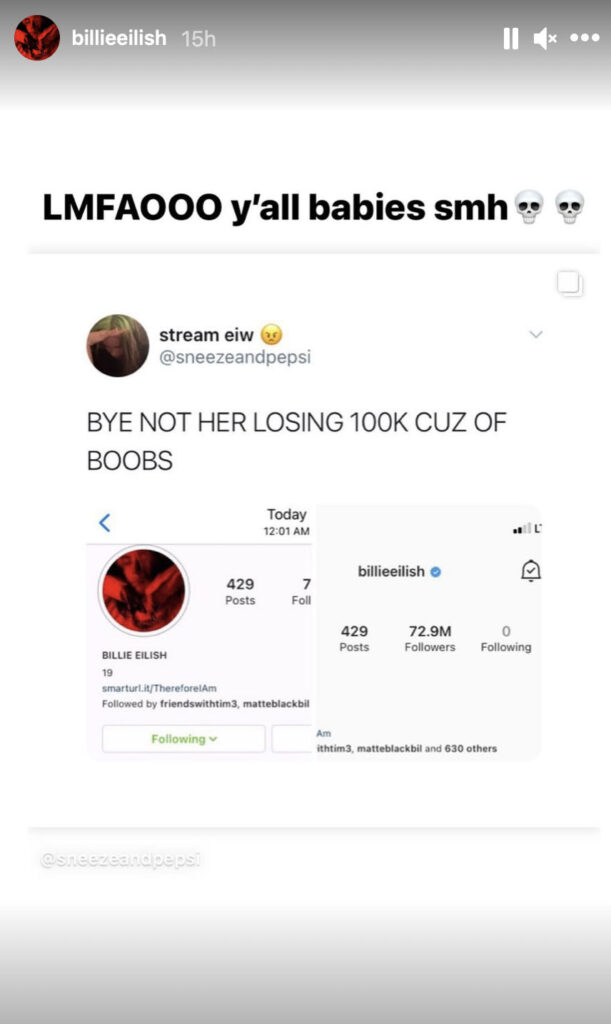 4d Interview: Froomes On Working With Flume & G Flip To Create Her Corporate Jingle Banger
What is the level above banger?