Grammy-winning duo The Chainsmokers are no stranger to the dancefloor heater, the New York electro outfit helping to soundtrack them across the world for years on end. It’s a relationship that has produced plenty of chart-toppers, multi-platinum hits like ‘Roses’ ft. Rozes, ‘Don’t Let Me Down’ ft. Daya and ‘Closer’ ft. Halsey cementing themselves into the ionosphere of pop music. Now, the duo are back with a new album titled So Far So Good this Friday, and although they’ve set an already high bar for themselves, the latest effort might be their best yet.

And so, we figured we’d immerse ourselves in the latest offering from the duo to gain a full appreciation for its scope and execution. Check it below.

Beginning the project with the vibrant ‘Rip Tide’, the Chainsmokers delve into the emotive and stirring from the first available instance. Shimmering synths and gentle drums find a nice midway between the up-tempo party soundscape they’ve become synonymous with along with the spirited slow burns that have permeated their sound in recent years. Singer Drew Taggart’s vocals demonstrate a significant progression from the duo’s 2019 album World War Joy, sounding both melancholic and uplifting as he finds a sense of hope in the metaphorical ‘Rip Tide’.

It’s a sentiment that’s continued in the following cut ‘High’, the duo meshing the acoustic and trap soundscapes for a heartfelt banger charged with resonance. The chorus “You only say you love me when you’re high” is a real standout in the track as well, showcasing that although the duo are veterans of the party sphere, they’re naturally drawn to the more vulnerable and intimate aspects of the songwriting medium.

But this isn’t just an album full of introspection and vulnerability, as evidenced by ‘Maradona’ and ‘Solo Mission’ wherein the duo experiment not only with sonics but with mood and execution. The former of the two makes use of an ethereal beat with fluttery keys and intricate percussion, the two forming a vibrant sonic backdrop for Drew’s utterances. The latter however is definitely on the more punchy and abrasive end of the Chainsmokers discography, a wared vocal loop colliding against revolving synths and hard-hitting drums in what’s an onslaught of bass and groove. It’s moments like these where we see Drew’s range as not only a vocalist but songwriter, meeting the intensity of the sonics on lines like “Living in the fast lane of indecision” while finding moments of escape and tenderness on lines like “Call me when you’re all alone”.

Piano lovers also get their goods on So Far So Good, with the seventh cut of the tracklisting ‘i love u’ flush with tickled ivories and magenta chord progressions that listen like they belong in a 2000s rom-com (starring Matthew McConaughey of course). It’s definitely a track where you can hear resident Chainsmokers piano man and one-half of the duo Alex Pall let loose, hitting the keys in this vibrant staccato fashion while on the hook while keeping it nice and smooth in the verses. There’s also a bit of a call-and-response going on between Drew and the added synths on the hook as well, the cog adding yet another layer to the technicolour collage of sonics.

An emotional high point of the album follows soon after, ‘Channel 1’ showing the Chainsmokers at their most restrained and resonant. Vocalist Drew can be heard almost whispering to the listener at various points, his singing about the dissolution of a relationship hitting extra close to home for anyone who’s ever suffered from heartbreak. The song as a whole is rather minimal, which makes for the fiery synths on the hook all the more impactful, the arrangement fully embracing the future-bass genre as the Chainsmokers continue to pivot and twirl in their attempt to defy convention or expectation on So Far So Good.

A personal favourite from the album however comes in the nostalgic ‘Testing’, the Chainsmokers calling back to a childhood classic in Charlie & The Chocolate Factory for a resonant bop that hits all the right chords. Aside from the childlike falsettos and swirling vocal lines, the track utilises hip hop influenced flutes and samples that harken back to classic Wu-Tang Clan. The track then makes a sharp divergence into an ‘80s-inspired dancefloor thumper, utilising the classic hook of ‘Pure Imagination’ to further project the tune into the next dimension. It’s definitely the most genre-diverse track on the album and shows not only how far the Chainsmokers have come musically, but what lies ahead for them in the sonic sphere.

Thus, it makes ‘In Too Deep’ follows ‘Testing’, the acoustic songbird acting as a musical reset for the album while preparing you for the project’s inevitable end. Treading the worlds of folk and indie pop, the slow-burn makes for a nice change of pace from the high-end productions of the rest of the album to remind us not only of the power of minimalist orchestration but to provide a showcase in evocative songwriting. Drew finds a solid synchronicity with the guitar as he sings about aspiration and transcending one’s surroundings, all while balancing love and commitment. The line “Take you back to my home town and make my parents proud” is definitely one that stands out, along with the title lyric “But I’m in too deep and I need a way out/You’re the only way out”. Of course, this isn’t just a straight-up acoustic ballad, however, with The Chainsmokers opting to inject a mesh of distorted vocals and hip hop drums reminiscent of Kanye’s 2018 classic Ye.

No doubt many will get lost in the tracklisting of this record, the journey The Chainsmokers curate is one of immersion and invigoration. ‘I Hope You Change Your Mind’ however gently lets you know your time with So Far So Good is well and truly coming to a close, the nostalgic guitar lines and synths setting a tone of sombre remembrance. Vocally this is well and truly Drew’s standout track, his soaring across his range on the title lyric along with the little inflections he peppers throughout the tune totally entrancing. It’s definitely got a hint of 2000s indie permeating its runtime as well, influences from the likes of Fall Out Boy and Sum 41 well and truly visible as Drew makes clear his hope for his love to change their mind.

Ending things with steady groove ‘Cyanide’, The Chainsmokers affirm the vast multitudes of highs and lows they’ve achieved on So Far So Good and their discography so far. Tempered by moody snares, trance-like samples and melancholic modalities, it’s definitely a self-assured reflection of their range as songwriters, and nicely sums up everything they touch on in the preceding tracks. So much so that the tune morphs and shifts from a straight-up vocal dance track to a moody instrumental that soars and dives according to its own desires. It’s a solid way to end the journey of So Far So Good, and by the time you reach that last minute of pure instrumental, you’re in total nirvana, and it’s utterly enthralling; an apt description for So Far So Good as a whole.

The Chainsmokers’ new album So Far So Good is out now. You can buy/stream it here. 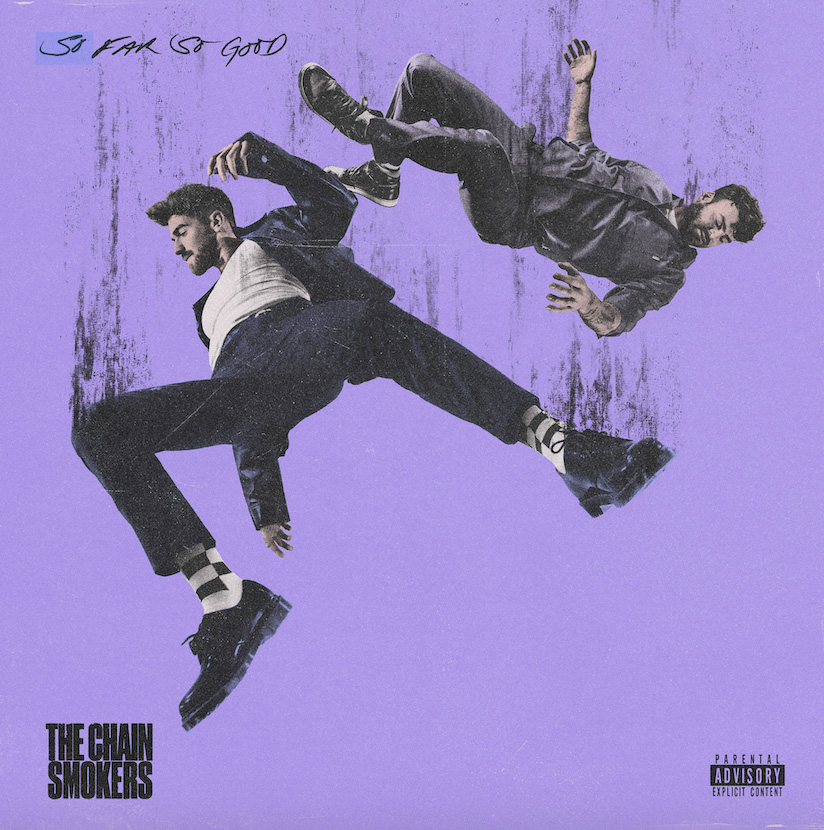