In arguably the biggest video game release for hip hop in Australia since ‘Big City Earnerz’ (RIP), Genesis Owusu and his infamous Goon Squad have entered the digital realm.

Fresh off the back of a AA side release on Friday for ‘Good Times’ and ‘Simmer Down’, the former now has an accompanying computer game by the same name. With gameplay reminiscent of the OG ‘Temple Run’ – but with a more sinister aesthetic and a fixed end point timed with the conclusion of the track – you can dodge, jump and smash your way through potential foes and obstacles.

Genesis Owusu said: “I really wanted the visuals to add a whole new layer to the song so it could be experienced in a multitude of ways. Some happy ass ‘lollipops and rainbows’ music video was completely out of the question. My managers ended up linking me with this genius, Justin Ridler, and we said ‘scrap the music video all together’. What’s more of an immersive experience than literally being in control of a character in a whole new world, in the form of a computer game?”

The juxtaposition between the immersive visual and audio ‘Good Times’ experiences match the contrast also reflected on the AA side release. Where ‘Good Times’ is bubbly and infectious, ‘Simmer Down’ is more calculated and poetic in nature. “First kiss was a fist, first love was a leech, see I cry with no tears and I smile with no teeth.” It’s the kind of versatility fans of the Canberra creative have to come to expect and with this latest foray into gaming, Genesis Owusu has levelled up yet again. Head over to genesisowusu.com to download the immersive music video/game now. 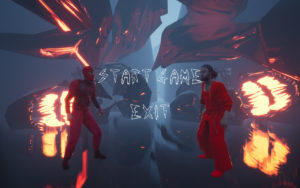