Man what I would give to see Folamour live right now…

The power of funk and disco is an elemental force second to none. It’s a cosmic combination that reaches far and wide, transcending all time and place to uplift spirits by the bucketload. Heartbreak, anger, despair or loneliness, it doesn’t matter what emotion you may be feeling. An injection of the disco spirit is enough to cure any ailment or frame of mind, invigorating the soul into a realm defined by pure joy and happiness.

French producer/ DJ Folamour is a total master of the genre, a wizard of the spirit that spreads unity and connection wherever he chooses to throw down. He’s an EDM treasure in every sense of the word, and most importantly, he’s just a fucking sick guy, the type that anyone would kill to have a sneaky bev and mixing sesh with.

His latest track ‘Just Want Happiness’ (out today) sees the funk & soul shaman dig deeper than ever before, coming through with a meditative gem that taps into themes of hope, catharsis and transformation. Intricately woven with gorgeously precise layers, the French producer lays himself bare for the whole world to see, and it’s bloody exhilarating. No doubt his upcoming album is gonna be every bit as beautiful, and we’re thanking our lucky stars we’ve got an absolute tune-and-a-half in ‘Just Want Happiness’ to keep us tied over until then.

Luckily for us, we managed to nail down the world class producer/ DJ to get the deets on the new track, his thoughts on the power of disco and of course, take a trip down memory lane to that iconic Boiler Room moment. There’s also a fucktonne of fangirling thrown in as well because, well, can you really blame us?

Being a fan of yours for quite a while now, I’ve realised you understand funk and disco in a way few others do; specifically, the power it has to heal and unite. When was the moment when you realised its powers?

I can’t describe a precise moment it happened but I always felt that soul and funk were warm, positive and loving music, that they’re able to change the atmosphere in a room in few seconds, people’s moods too, in any circumstances. I think I definitively understood this when I started touring the world and I could see people faces in the crowd changing during my sets; smiling, hugging their friends, singing, dancing altogether, feeling the same way I feel.

I think going into 2021, the world as a whole felt quite fragmented and hurt from the events of 2020. ‘Just Want Happiness’ listens like an acknowledgement of all the trauma, but is still so filled with your signature, healing vibes. I just wanna know, where are you at as a producer, DJ and as a human being, in 2021?

2020 has been challenging in many ways to all of us but on a personal level, it was easier for me to go through 2020 than 2019 and 2018. I spent the last few years taken by a storm, moving from cities to cities and I was struggling to find my real place down here. I just wasn’t fitting anywhere and I decided to write about it for my next album. ‘Just Want Happiness’ is about that feeling of aiming for better days, the calm after the storm, it’s about healing and rising again. As a producer and a human being, I’m right there now, trying to find my way through these days, focused on my own path and what I can do to bring positivity to my people.

The tune carries on the slow vibes from last year’s ‘I Miss Having Someone To Talk To,’ but in a way more sombre, more complex kind of way. It captures so many highs and lows so gracefully. Was that a conscious effort while creating it? Or did that blend sort of happen on its own?

I wanted this song to be my humble take on resuming the emotions we all go through during life in a song. I wanted it to be nostalgic and sad but hopeful and bright at the same time, evolving all along and I’m proud of my rendition.

Musically, the song is probably your most emotionally charged and cathartic piece yet. It feels like a total journey into the depths of your soul. Was it intimidating digging deep like that?

It always is to be honest! Every time I’m writing or producing a new song, I know the story I want to tell, the memories or emotions I want to express and it’s always hard on some level to dig to find the essence of it. Wanting to tell a story is fine but trying to find out what it really meant to me and all its effects on my emotions, for instance, can be quite tough but it surely is cathartic at the same time.

I also wanna say congrats on that beautiful music video. You really went all out to visually capture the tenderness of the single. Was the video and story behind it conceptualised early on? Did it go hand in hand with the tune from the start?

I had a clear idea of what I wanted visually for this song as I produced it with many images in mind. This story of a man, exhausted by the cities and their contemporary sadness and loneliness, leaving this world to walk through the world to find its place and its way to happiness again was a metaphor of my last two years and it meant a lot to me to represent the weight and the relief the best we could. I also felt like it needed to express the initiation rite aspect of this man’s travel, the way each element found on his road was changing him, pieces by pieces. The director came with the idea of expressing the pain and the sadness with real fire and I found it beautiful and so close to how I actually felt, the way people can look at you and seeing something that seems fun and interesting to them without paying real attention to what’s behind, how people are not getting too close to you as you were on fire, it was so precise I found it amazing.

You said you wanted to represent the story of the album through this particular song. Would it be accurate in saying that ‘Just Want Happiness’ is the emotional heartbeat of the album?

It definitely is! To me, “Just Want Happiness” is expressing all the emotions of the album in itself.

What else can we expect from your upcoming record? I think it’s fair to say us fans are desperate for another full-length project from you.

It’s going to happen soon. For now, I’m placing the first rocks of the first wall and I can’t wait for the moment when people are going to find out what we built together. You can expect a project coming straight from my heart and soul, more personal than anything I ever released!

Just broadening things out a bit, you have one of the most iconic Boiler Room moments of all time. DJs all across the world have adopted it into their own sets. How does it feel to have created such a lasting effect across music, with a simple two minutes?

It feels great! Of course, it comes with its fair share of bad sides but overall I’m just proud of seeing videos from all over the world of people either watching my sets with their families, friends, kids, in restaurants, pubs and more or other artists trying to recreate the same moment, being happy, united and dancing together.

You’ve definitely been keeping that magic going over the past year, with ‘Folamour Presents Love To The World’ as well as your Isolation Boiler Room and NYE snow performance. I know us fans have absolutely adored those, but as an artist, what have those sets been like for you?

It’s been great actually. As I said before, if I can create more moments for people to be happy, I am too! In a time when I can’t travel the world to come to play music to my people, recording these sets and still being able to spread positivity and joy has felt amazing.

You said in your Boiler Room interview last year that all you wanted was to “Make people dance in their living room” with your Isolation Set. Even though clubs and the dancefloors of old are on hold at the moment, do you reckon those living room dance floors are just as impactful? Does the funk and groove prevail?

It does, 100%! Even though I read here and there that some people were tired of streamed sets, which I can understand, it’s the only thing I can do for now and I do my best to do it in a way that helps to go through these dancefloor-less times. I don’t think they can be as impactful as being all together in a room, dancing, singing and sweating united, it’s still a great way to share beautiful music and to remind us they’re some great times to come and we have to hold on until they’re here.

Lastly, when the world goes back to normal and those dancefloors come back in full force, how do you reckon performing to crowds is gonna be different? Will there be more hope in the air? More gratefulness?

It’s hard to know but I’m sure we’ll come back with such intensity and joy after what felt like an eternity and we’ll feel as one. Many are afraid of coming back to these places of gathering but I think we’ll be more than happy to finally being able to feel other people around us, the warmth coming out of all of us, to remember we’re part of something that can’t be taken from us and that will always be here.

Folamour’s new single ‘Just Want Happiness’ is out now. Be sure to keep up with him on Facebook and Instagram to stay up to date on all of his latest projects. 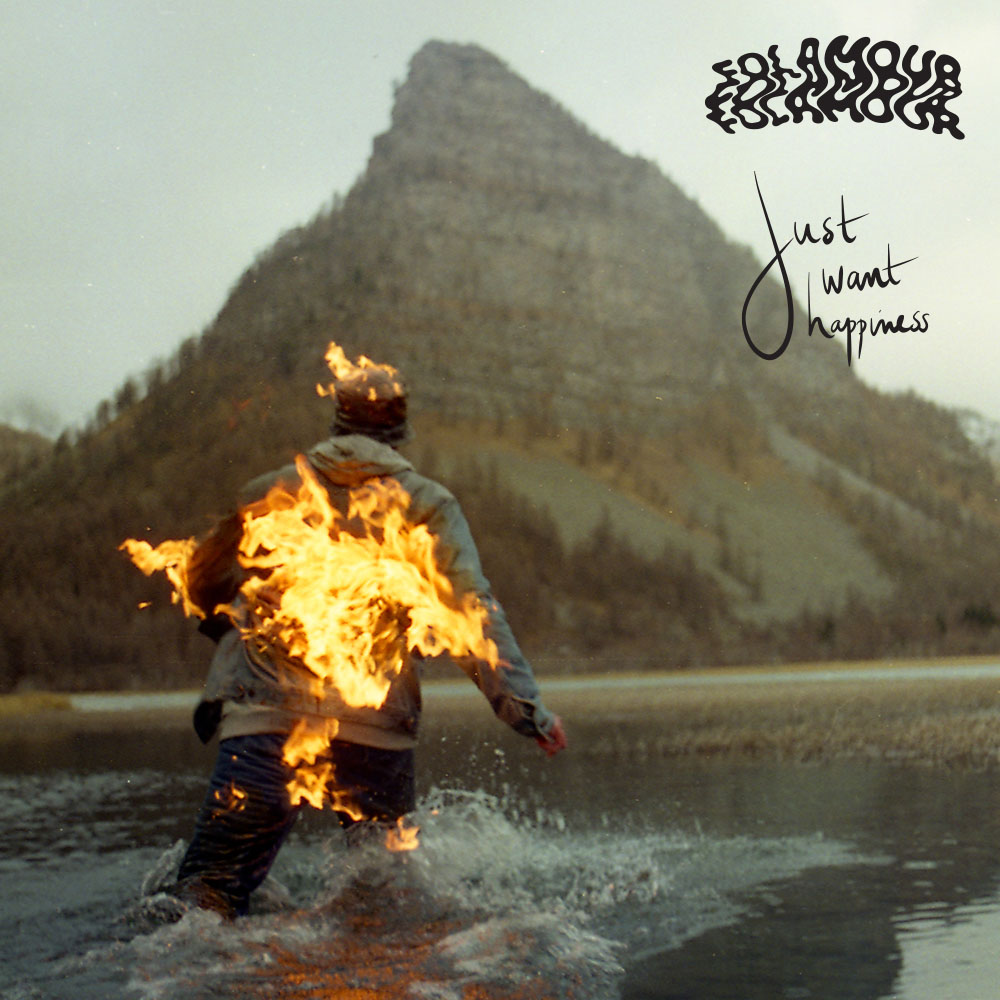