We spoke to Jay from his home in Fremantle ahead of his show at Oxford Art Factory tomorrow night.

In between playing shows with world-beaters Tame Impala and rock oddballs POND, Perth based multi-instrumentalist Jay Watson A.K.A GUM has somehow found the time to put out four albums of his own. It’s impressive on many levels; how does he fit it all in? How does he manage to write and contribute so much music to these projects? How does he find the energy to play shows seemingly constantly? It’s enough to make us feel very lazy by comparison.

“Between tours I don’t have to work. I’m really lucky and I can afford to live off playing in bands now, so I kinda just wake up and do it,” Jay says with a matter-of-fact modesty that shines through the telephone line.

Having burst onto the scene about 10 years ago, Jay and the other members of POND and Tame Impala have seemingly carved out their own ecosystem within the industry, one where loyal fans around the world revel in their creativity and rethinking of both music and the business.

“Early with Tame Impala, a lot of the things Kevin wanted to do were not considered smart ideas, business-wise or success-wise, with recordings and the way we played. Just the fact he was so bloody-minded in doing it his own way I think, reflecting, is quite admirable,” Jay says. “We’ve always made music for ourselves but have been as ambitious as we can… I think you can hear that.”

Jay’s roles within Tame Impala and POND has seen him play guitar, bass, drums and keys as well as fronting GUM, which makes it hard for him to pin down exactly where the musically-fluid utility player feels most at home on stage.

GUM’s latest album, The Underdog is a collection and combination of various genres – from 80s disco, 90s hip-hop, all the way through to the familiar electronic-style psychedelia that one would associate with Tame and POND. It’s a broad palette of sounds that reflects the endless access to music at the fingertips of the Spotify generation.

“I think we used to be fairly into the idea of rock ‘n’ roll and psychedelic music, then as a gang, we got weird and reactionary and almost embarrassed about that. And we got really heavily into electronic music and R&B and hip-hop,” Jay says. “Now I’m listening to heaps of stuff that I used to listen to and have realised there’s no reason why you can’t listen to weird 60s English folk and Ja Rule in the same 10 minutes and try and put it together.”

This amalgamation of influences makes the record feel like an evolving entity, and retrospectively, Jay likens the record to a day in the life narrative that wrestles with spikes of distress and rides waves of jubilance. “I wasn’t thinking about it at the time, but when I put the track list together, it made it a weird narrative of waking up feeling great, playing the show and going out, feeling amazing and waking up the next day feeling awful. It’s filled with self-doubt and general anxiety stuff,” Jay says.

Despite having literally racked up billions of plays on streaming apps and YouTube for hugely successful tunes like Tame’s ‘Elephant’ or POND’s ‘Paint Me Silver,’ Jay doesn’t seem to wear any kind of “I’m a rock star” badge around. Like any of us, he can be vulnerable to overthinking comments and criticisms from people that in reality should have little impact on our lives.

“People say mean shit. People say good stuff too but you tend to skim over that and scroll down ’til you see someone saying it’s awful, which people do. It’s crazy. I think music I hear is awful all the time but I keep that in my head. I don’t even talk to my friends about stuff being shit. It’s a waste of energy,” Jay says.

“You tend to be more hurt by flowery intellectual reviews where it seems like the person is smarter than you so they must be right, you know. As soon as I see some kind of syntax error in a review I’m like fuck, whatever. They can’t even write properly! (laughs) But if it’s like a really beautiful review that’s 4/10 I’m like, ‘Awww.’ Classily shredding on my dreams,” he says with a chuckle.

Measuring his accomplishments by the quality of his music, as opposed to sales, has encouraged and allowed Jay to create albums like The Underdog and uninhibitedly examine pop music. ”It might never be successful in terms of money or notoriety, but music people will hear it. That’s all I care about, that the ‘me’ of wherever, sitting on YouTube, would find it.” 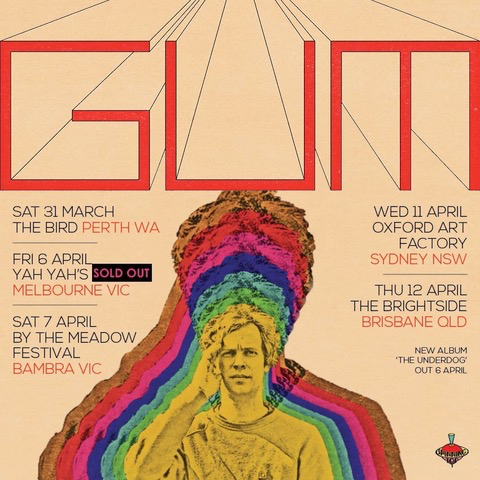 Share this
Interview: Jay Watson A.K.A GUM Tells Us About His Latest Album, ‘The Underdog’