Hip hop is in good hands…

Baby Keem. It’s a name that’s been impossible to escape the last couple of months. Whether you’re a fan of hip hop or not, the magnetism and explosion of Baby Keem’s artistry has been reverberating through the soundscape of global culture, and with his debut album The Melodic Blue out now, the young 20-year-old is on a one-track journey to hip hop dominance.

From the opening bars of ‘trademark usa’ to his playful back and forths with mentor/cousin King Kendrick on ‘range brothers’ and ‘family ties,’ the young upstart is seemingly unstoppable, his artistry tempered with the type of fire and reactivity that’s so inherent to a young star with the world ahead of him.

But before we dive into the new album, we figured we’d take a little trip down memory lane and track some of Keem’s biggest moments, from his breakout single ‘Orange Soda’ to some of his biggest collabs; the ones that have launched him into the stratosphere and have helped him become one of the biggest names in mainstream hip hop. Check it below.

The breakout single that started it all, Keem burst onto the scene in 2019 with a record in ‘Orange Soda’ that put the whole hip hop world on notice. Keep in mind, Baby Keem was barely 19 when this bad boy dropped as a part of his DIE FOR MY BITCH EP, and grew up with legends (now peers) like Drake and Kanye soundtracking his rise (anyone else feel old yet?).

But the man captures the glory of 90s hip hop in spades on the track, the smoky beat laying an attitude-filled backing for his lyrical onslaughts as he outlines his love for another and simultaneous frustration and the barriers between them.

Keem isn’t just a rapper, but a proper production powerhouse, and he’s been focused on proving that since day one. But still, it’s pretty wild that Keem helped produce ‘Nile,’ the Lion King track with Beyonce and cousin Kendrick oozing lush magic as Keem takes you to a vivid landscape where feeling is the law of the land and the natural landscape breathes its own breaths.

The gentle synths and harmonies are totally ethereal as well, providing the perfect backing for Kendrick and Beyonce to flex their respective vocal talents as they retell a story of biblical proportions. It set the stage for many productions to come, and manifested utterly and fully when Keem got to The Melodic Blue.

Whether it be battle rap, bangers or chill grooves, Keem’s pen can do it all, and he gets in his baller bag hard with ‘durag activity’. It’s important to note that the track was one of the lead singles from The Melodic Blue, and was only released four months ago, when Keem was properly making waves abroad as the next heir of the game.

His tone is oddly infectious in this cut as well, the laid back delivery giving this real OG vibe of an MC not focused on glitz or glam, but obsessed with murdering the game. Travis’ verse is of course totally hypnotic, his meshing with Keem amplifying the exchanges between the two to an exhilarating degree, making it that much more satisfying when they were to link up again on the recent ‘Praise God’ cut on Kanye West’s Donda.

Speaking of the devil, Baby Keems verse on ‘Praise God’ is widely hailed as one of the greatest verses on the long-awaited album. Keem goes forth with a hunger and kinetic frenziness that you just can’t manufacture on the track. The verse as a whole gives us real Nas ‘The World Is Yours’ vibes, his manipulation of phrasing and rhythm echoing amongst the chamber of melancholic synths. His autotuned ad-libs are totally fire as well, alternating between hard and menacing to almost childlike as Keem abandons all traditional rules associated with the hip hop ionosphere.

It’s a milestone that would make any hip hop head explode with pride. To feature on a Kanye West album with Travis Scott and come out with the most critically acclaimed verse on the entire record? It was a huge moment for the OG, and truly put him on the map.

To go toe to toe with your mentor (and cousin!) on a song is a huge undertaking. Every double entendre or trick that you’re employing is more than likely derived from them, and they’ve usually got years of experience over you. And then add the fact that it’s Kendrick Lamar into the equation. It’s a huge task, but Keem more than holds his own against Kung Fu Kenny on the full-circle moment, the former newcomer bringing the very same fire Kendrick burst onto the scene within Good Kid, M.A.A.D. City in 2012.

Most rappers when put in such a position would come up short, or overextend themselves so far they end up defeating themself in the lyrical realm. But Keem has that fiery hip hop soul burning through, and of course, proves that he was well worth Kendrick’s tutelage; that he’s now his own man on his way to greatness.

Now, take our hand as we dive headfirst into The Melodic Blue in all of its hip hop gold and splendour. Check it below.

Beginning the album with the eerie ‘trademark usa,’ Keem lets rip from the jump. His staccato flow finds an almost haunting flow against the screeching analogue synth in the background, Keem going all the way in on the sacrifices he’s made to make it in the music industry. If you’re an OG fan you’ll know old mate actually teased the opener way back in the ‘Orange Soda’ video in 2019, which goes to show just how damn long Keem’s had this plan in the tank, ready to be unleashed upon the masses.

But Keem isn’t just the serious, ‘Me Against The World’ type of rapper, but he knows how to have fun, and as the name suggests, he’s having a world of joy on ‘pink panties,’ the hook is especially powerful here (we’re already imagining it live) tinged with a braggadocious steeze that throws it back to 2Pac’s ‘How Do U Want It.’ Again, his flow is totally organic and flows like a stream of consciousness, almost as if the final vocal is a one-take freestyle.

It’s also worth mentioning that we’re real suckers for soul samples in the LWA offices, and so of course, ‘Scapegoats’ is now our favourite hip hop interlude of the year. Rapping across the ‘Redemption’ sample over the course of a minute, Keem rightly gives us a vibe check before we get too far in as to what to expect from the record going forward; naturally, it’s flush with bars about his past and his family, and how they’ve made him into the man he is today. Keem being the production whiz he is, you can tell the matching of such intense bars over such a sample was very deliberate, the concoction helping to drive home the message of just how far the man with stellar effect.

Then of course comes the first Kendrick collab ‘range brothers,’ which is, no cap, probably our favourite track on the record. The subtle vocal chops in the background as Keem and Kenny trade lyrical gunshots is totally thrilling. It also features plenty of ad-libs, a beat switch and a crazy lyrical onslaught by Keem around 3:50. It’s everything you could want from a hip hop collab, and mark my words, this is gonna be the dark horse of the album, the one that’ll keep us talking years from now when Keem’s got Grammys and platinum records in every corner of his future mansion (if he doesn’t have one already).

Other highlights include ‘south africa’ and ‘lost souls,’ the two deep cuts acting as a melodic and textural yin and yang. It’s almost like ‘south africa’ and its crushing chords are throwing it back to the ‘HUMBLE’-era Kendrick while ‘lost souls’ echoes the autotune mastery that helped propel Travis Scott to superstar status in the early 2010s. Bottom line, Keem’s a keen learner, and he’s learned all he can from the GOATs, so much so that they’re now his peers.

The two tracks are smack bang in the middle of the album, a place where it’s easiest for a track to be relegated to filler. But both ‘south africa’ and ‘lost souls’ are anything but, and they set the tone perfectly for the second Kendrick collab ‘family ties.’ It’s a classic example of battle rap that energises like few others, the cascading horns and intermittent acapella snippets meshing perfectly as the alternating beat switches further adding to the immersion of it all.

It might be one of the finest reminders on the album of how useful it is to be a rapper and producer, and to consequently employ both of those skills to their absolute fullest on a debut album. Everything feels like it’s crafted around Keem’s verses like a glove, a sentiment repeated on the euphoric ‘scars’ and reggae-reminiscent ‘booman.’ As for our thoughts on ‘durag activity’ with Travis Scott, well, we’ve already outlined them above. But if you need a refresher, it’s bloody sick.

Capping off a sixteen track album takes a hell of a lot of talent, but Keem more than steps up to the plate, ‘vent’ and its voodoo Bladerunner vibes helping to knock us off balance and further cement The Melodic Blue into our psyche. It’s kind of genius what Keem is doing here: There’s no resolution or finality to it, rather Keem continues to fire on all cylinders as he proves that his hunger will never die, and that even at the end of an album he won’t ease off with his lyrical prowess. Kendrick’s adlibs are fucking badass as well, listening as if he’s almost yelling at us to wake the hell up to Keem and the future of hip hop, and you have no choice but to listen after the track concludes its 2:16 runtime.

Finally, Keem ends the record with ‘16’, the meditative cut that listens like it could transcend all space and time. It’s almost a breezier, more hypnotic ‘Starboy’ from The Weeknd, and it’s impossible not to feel reassured and transformed after listening to it. Reassured that the future of hip hop is in good hands, and transformed into a No. 1 fan of California rising star Baby Keem.

Baby Keem’s new album The Melodic Blue is out now. You can buy/stream it here. 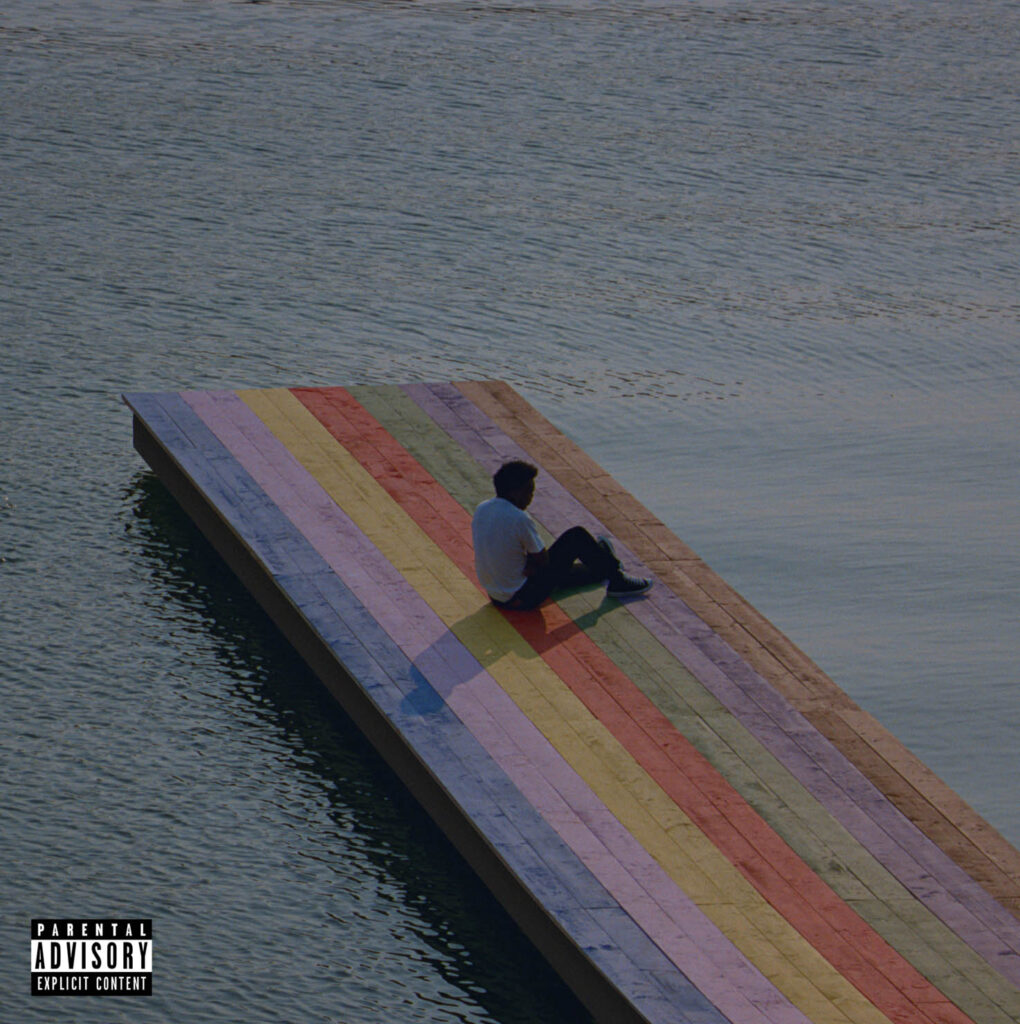