It’s been a long time coming for Eddie Boyd AKA Boydos’ record. We first stumbled across his track ‘Plans’ and accompanying spaghetti-covered clip about a year ago and have been hooked ever since. His drip feeding of tasty singles along the way has only served to grow our appetite, so thank fuck we’ve finally got an album’s worth of material to delve into.

One thing we’ve noticed is an introspective rawness to Boydos that reveals itself slowly throughout the album. Tracks like the brooding ‘Dear Mother, I’m Just So Happy’ and the reflective thumper ‘Stoned’ further the flawed-yet-aware, heart-on-sleeve ‘mystique’ of Boydos – the record truly does feel like chapters of poetry chronicling his foray into manhood.

He’s playing a run of shows to support the release too, kicking off next week at Old Bar in Melbourne (info here, dates below) which we highly recommend you get along to. He’s backed by a relentless band and you can really feel his voice when it’s coming at you via a few thousand watts. But for now, check out his track-by-track below, with words fresh from the artist’s mouth: 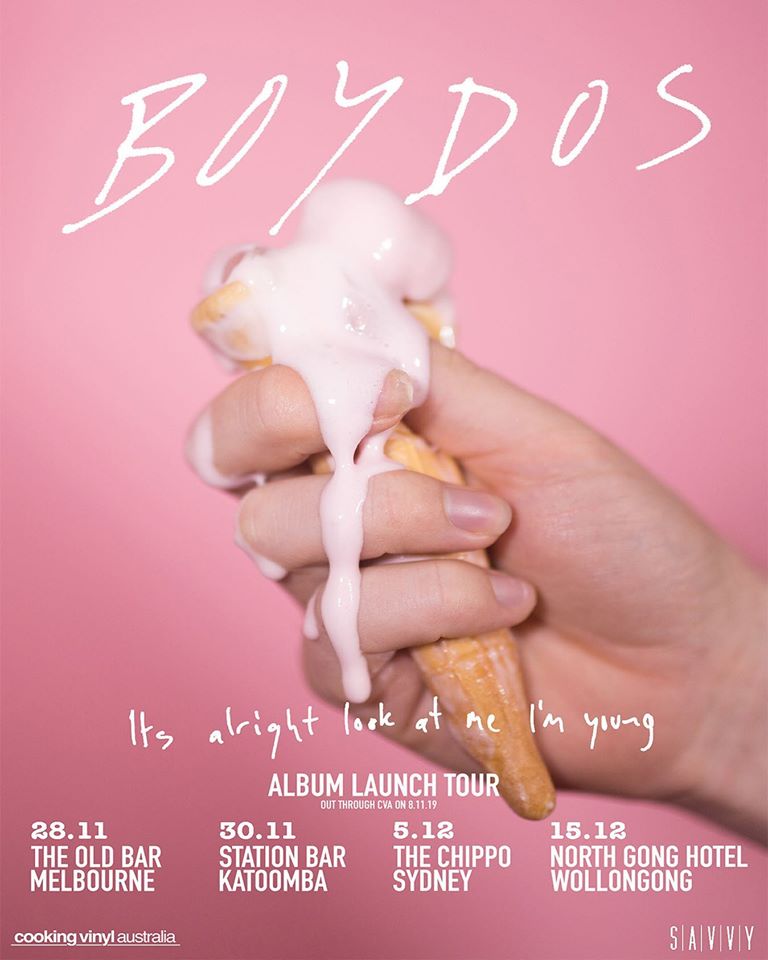 There was a period of a year or so where death became a thing that was always on my mind and I was always worried that something was wrong with me. I was trying to work out what death meant. I don’t believe in any kind of god and it became a bit of a drawn out existential crisis. At the same time though, I was getting too drunk too often and doing the stupid risky things that people do. So I wrote this song about having that contradiction going on in my life.

I borrowed my mum’s car to get back home to the city from my family home one night after my car had broken down, probably because I wasn’t taking proper care of it. I have a strong aversion to public transport so I borrowed the car and I was kinda just feeling a bit spoilt and hopeless on the drive home so I started writing the first verse of Plans. My close friends at the time all seemed to be at a similar point in their lives. Everyone was a bit directionless and relying on other people a bit too much and talking a bit too much shit, so this song is kinda taking the piss out of us all.

This song started as a bit of a daggy funk jam and went through a big evolution in the studio to become what it is now. I really didn’t have high hopes for this one so I was pleasantly surprised at how it turned out. It became this epic, drum driven, chaotic explosion. Couldn’t have done it without Clay shredding the tubs.

Being a part of such a great music community, some people inevitably gain momentum and success before others. This song is about wanting to feel happy for and proud of someone but having those emotions squashed by jealousy and feeling really shitty about that. It’s about wanting to move past my own envy and self pity to celebrate and support someone else.

I wrote the riff for this one in the lounge room one night and spent the next 6 months desperately trying to fit it into a song. It went through a heap of different stages but I finally settled on something with the right energy. It became this cheeky song about being apart from someone and really longing for them but trying to act cool about it. Monty and I are always having competitions to see who can play the riff the fastest. I usually win.

This is the love song of the album. I wrote it at a time where I felt really great about the relationship I was in and so many of my friends seemed to be breaking up or were just stuck in what seemed to me to be dysfunctional relationships. Everyone seemed to be trying so hard to make things work and I felt lucky to be in a relationship that just felt easy and uncomplicated. Eventually that one got pretty complicated so I guess I’ve gotta eat my words.

This one’s a little bit of a dig at small town living I guess. I kept seeing school friends on Facebook, getting married and buying houses in the town where we grew up and I couldn’t understand why you would want to rush into that. Each to their own though, that’s just me. I definitely won’t be rushing back to Winmalee anytime soon.

At Ease In Your Arms

At Ease is the oldest track off the album. I was in a relationship that was off to a bit of a rocky start and this song is me venting some of my frustrations. I don’t usually write lyrics first but for this track I wrote the bulk of them on a family bushwalk and then figured out the rest when I got home. The power of nature!

This one was such a last minute addition and to me it became the perfect closer to the album. I’d had this guitar part for a really long time but hadn’t been able to put anything to it. We were in the studio and Ben, our producer, had been pushing me to write one more song while we were there. I usually take my time writing but the pressure must’ve really worked on me because it all just came together one night and we recorded it the next day. It was a great feeling.

Lyrically it kinda sums up the way I was feeling at that time in my life, and I think sums up a lot of themes on the album. If there’s one song on the album that really makes me nostalgic for that whole recording process, it’s this one.