Most artists are informed by the worlds they are immersed in; it’s only natural to be inspired by what you are exposed to. However, there are a select few whose work and personalities are so remarkable that they are able to shape the world around them, sewing their artistic essence into the fabric of everyday life.

Keith Haring and Jean Michael Basquiat are two of those individuals.

For the first time ever down under, the National Gallery of Victoria is bringing the legacies of both art icons together for Crossing Lines. The colossal exhibition looks at the parallels between the career trajectories of both artists, from their prominence on the New York art scene in the 1980’s, interweaving of socio-political messages into their visual languages, and ways in which their legacies have endured to arts fans the world over.

We talked with Assistant Curator of International Exhibition Projects Meg Slater, on the longstanding adoration of both artists and some of her favourite works from the show! 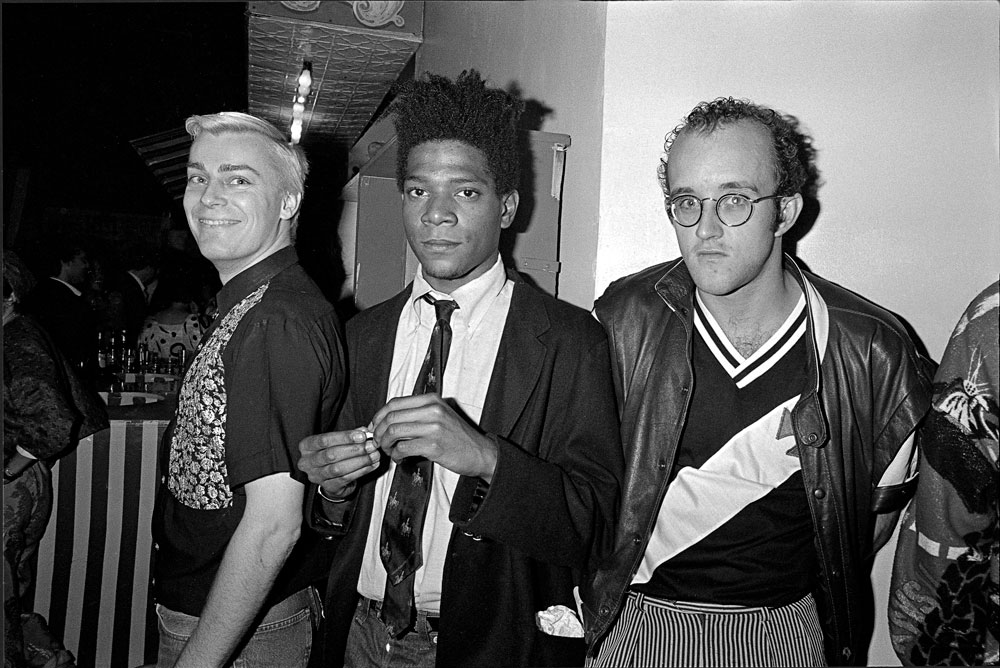 How did the initial idea come together for such a monumental show?

This exhibition has been guest curated for the NGV by Dr Dieter Buchhart, and his Co-Curator Dr Anna Karina Hofbauer, who have previously curated major monographic exhibitions on both Keith Haring and Jean-Michel Basquiat. After discussions between Dieter, Anna and NGV Director Tony Ellwood AM, the exciting possibility of presenting the work of these two significant late twentieth-century artists was raised. The NGV’s close collaboration with Dieter and Anna over the past four years has resulted in this comprehensive exhibition, which presents the work of Haring and Basquiat in dialogue for the first time in a museum context.

Can you detail just some of the hard work that went into curating the exhibition? 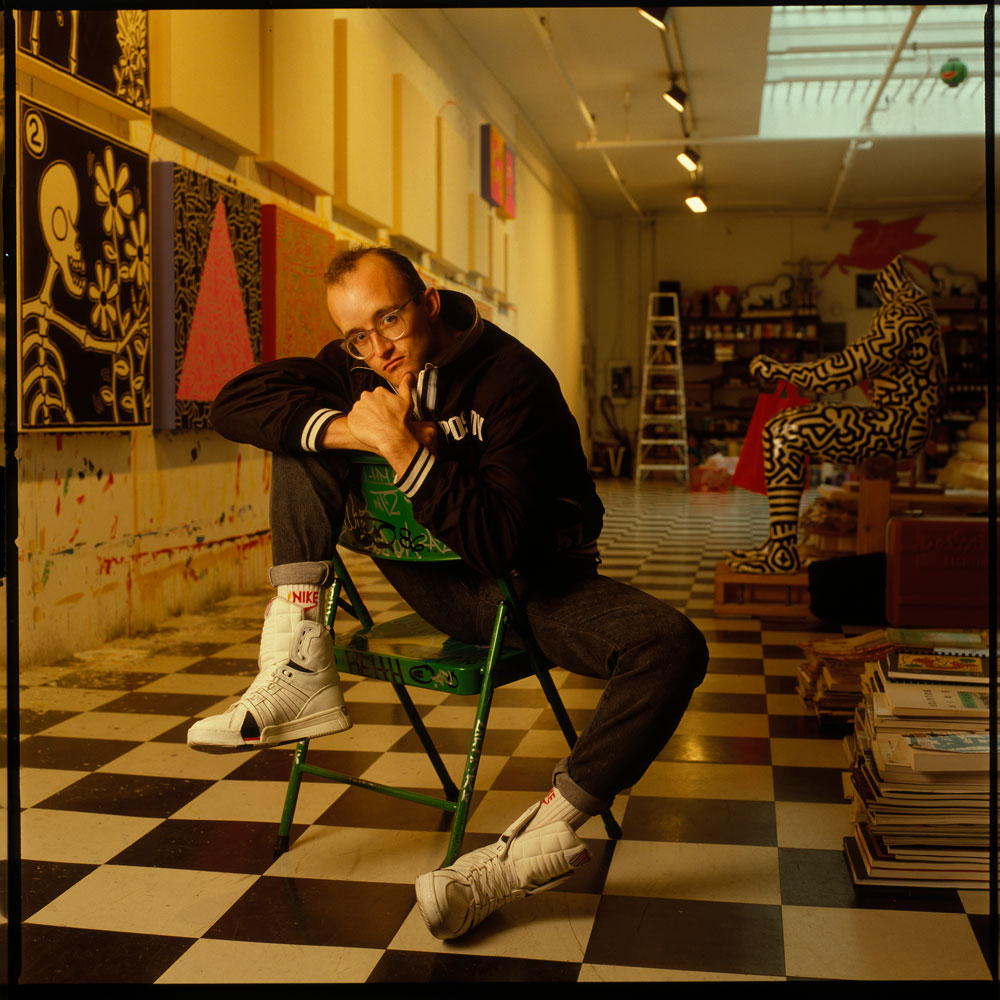 Curating an exhibition of this scale and complexity involved the hard work and dedication of the exhibition’s curators and a large project team here at the NGV. The checklist development stage of the exhibition was one of the most challenging and exciting.  Haring and Basquiat both produced a prolific amount of work in a small amount of time. However, this also presented an incredibly rewarding research opportunity for the curatorial team, to review each artist’s extensive oeuvre, and select key works for each of the exhibition’s twelve thematic sections. Other important stages in the presentation of Crossing Lines include the production of an exhibition publication with new scholarship on the work and life of both artists, the exhibition design and the preparation of interpretive materials for the widest possible audience.

In your opinion, why do you think the legacies of Basquiat and Haring still resonate with people around the world to this day? 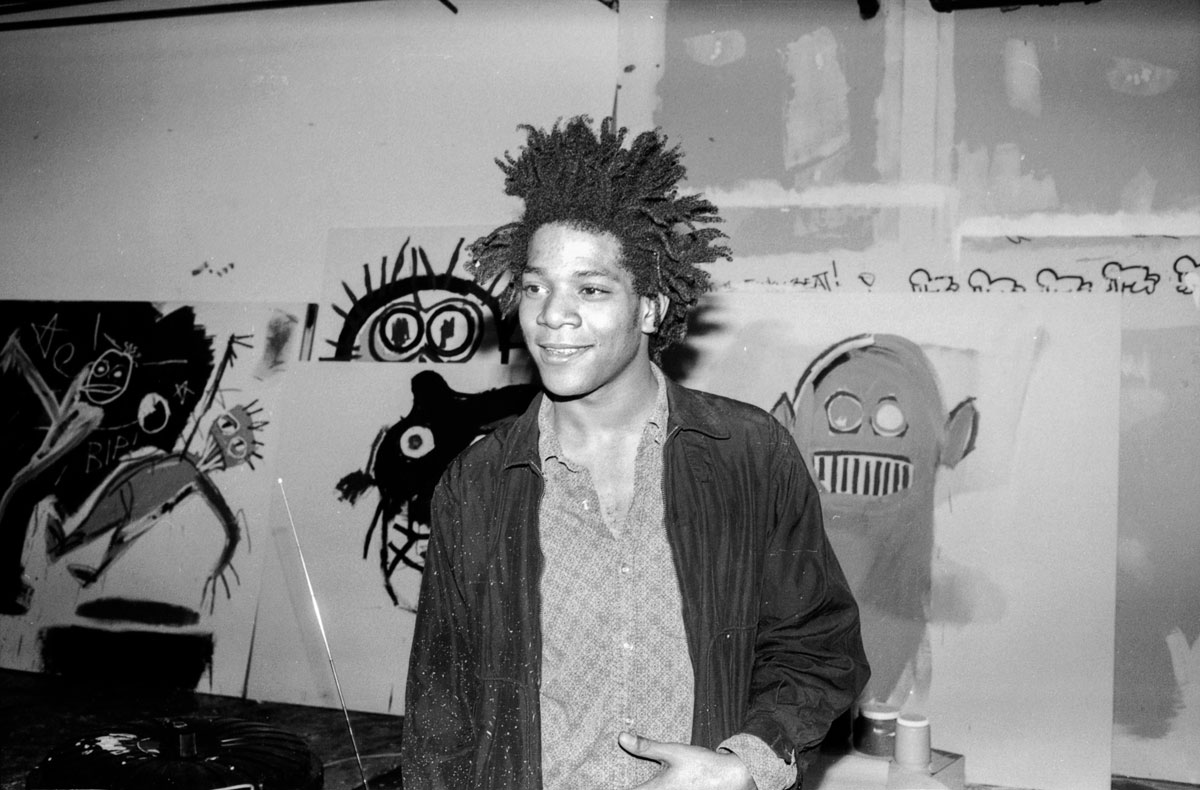 There is a social consciousness embedded in the work of both Haring and Basquiat. Almost all of Basquiat’s works address the topic of race, specifically his experiences as a man of Puerto-Rican and Haitian descent, living and working in a primarily white art world. Haring was a dedicated activist, addressing a range of social and political issues of the time in his work and activism, including discrimination against the gay community, the AIDS epidemic, destruction of the natural environment and racism. By responding to and reflecting the world around them in their work, Haring and Basquiat removed the distance between ‘high’ and ‘low’ art, and challenged many conventions and traditions that characterised the art world. These bold gestures continue to captivate artists and audiences today.

What are five works people can’t miss when they come to Crossing Lines?

There are so many works in the exhibition (over 200), so this is a difficult question to answer! Some particularly special works and moment in this exhibition are: 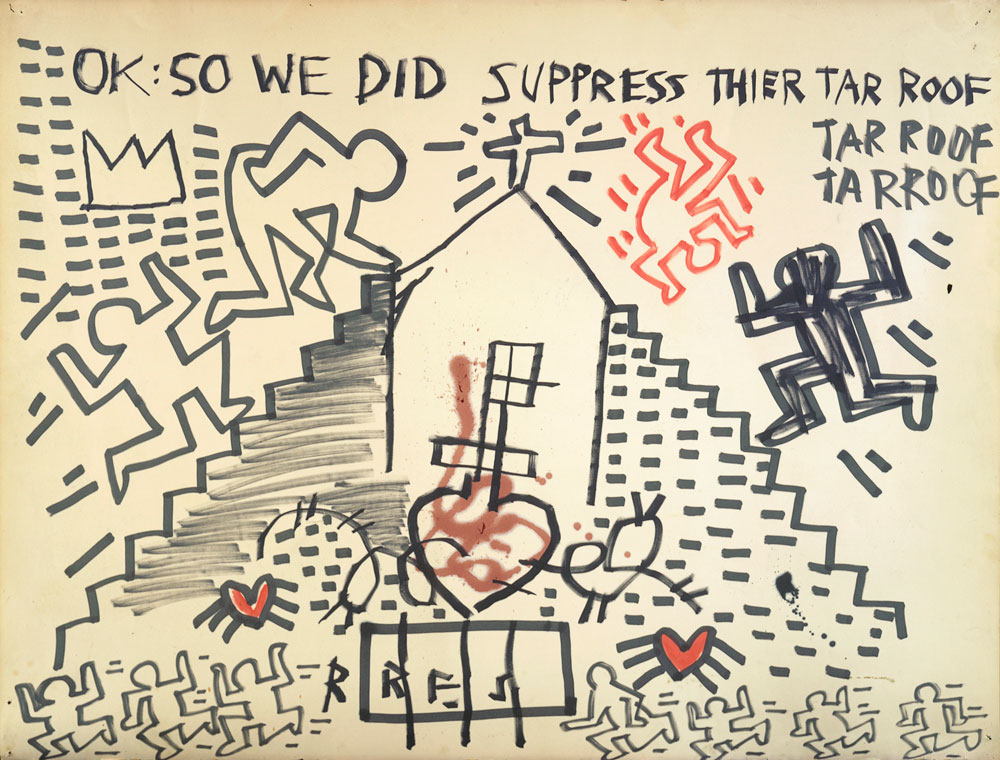 Presented side by side in the first section of the exhibition. It is extremely rare for audiences to have the opportunity to see these unique works, which blend the distinct visual language of both artists, together in a museum setting. 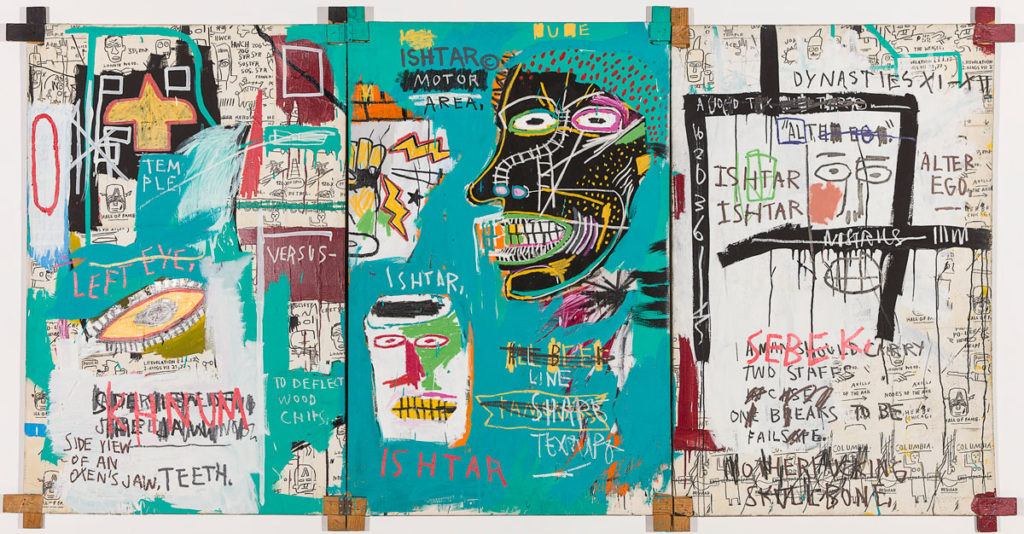 
A monumental, three panel ‘cross-bar’ painting, produced by Basquiat during a period when his works reached their greatest visual and conceptual complexity. In this unique work, audiences have the opportunity to see many of the sources Basquiat quoted from – including anatomy, popular culture, fine art and ancient history – come together in a densely layered composition that encourages close and considered looking. 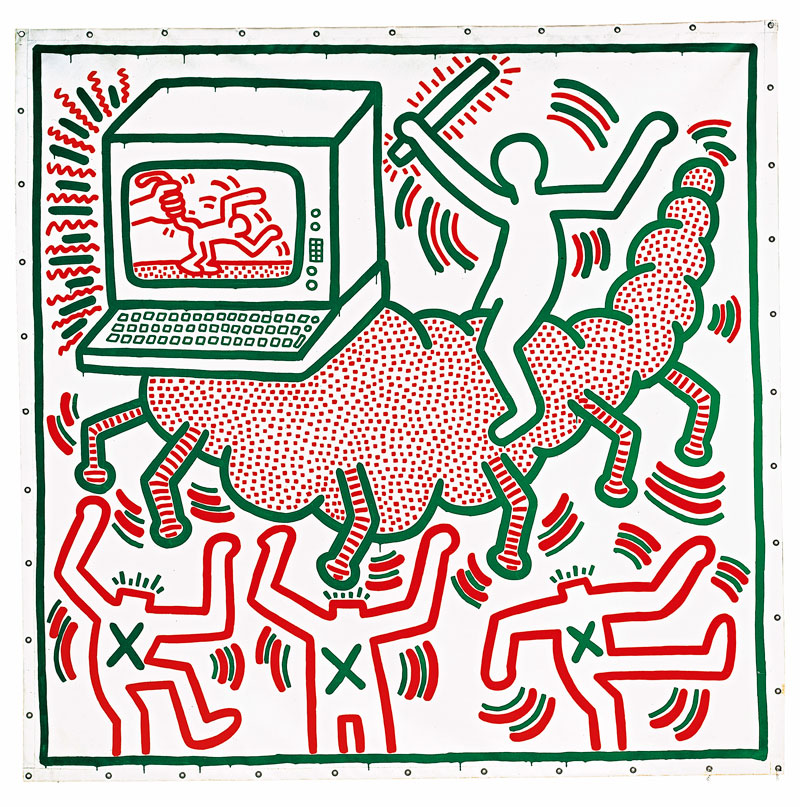 Many of which reflect on the social and political issues of his time – including gay rights, the AIDS crisis, the destruction of the natural environment and racism – through his use of symbols and motifs from his renowned visual vocabulary. Audiences are able to understand how Haring, inspired by semiotics, the cartoons he watched as a child and other formative experiences, created a cast of visual characters, which he would combine to create layered narratives that everyone could understand. 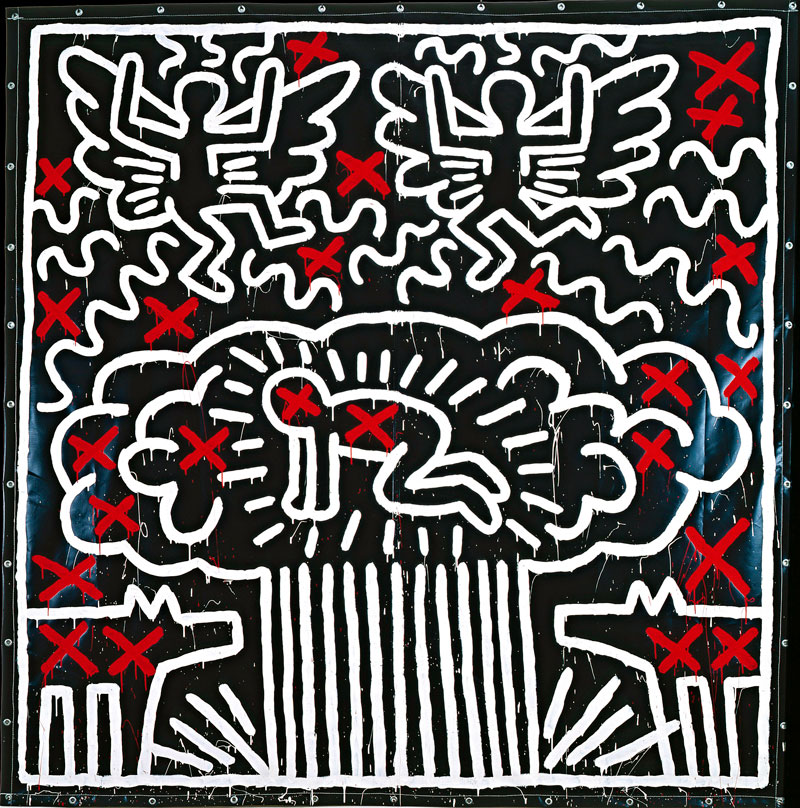 4.    In the section of the exhibition dedicated to how Haring and Basquiat each intersected with the world of performance and dance 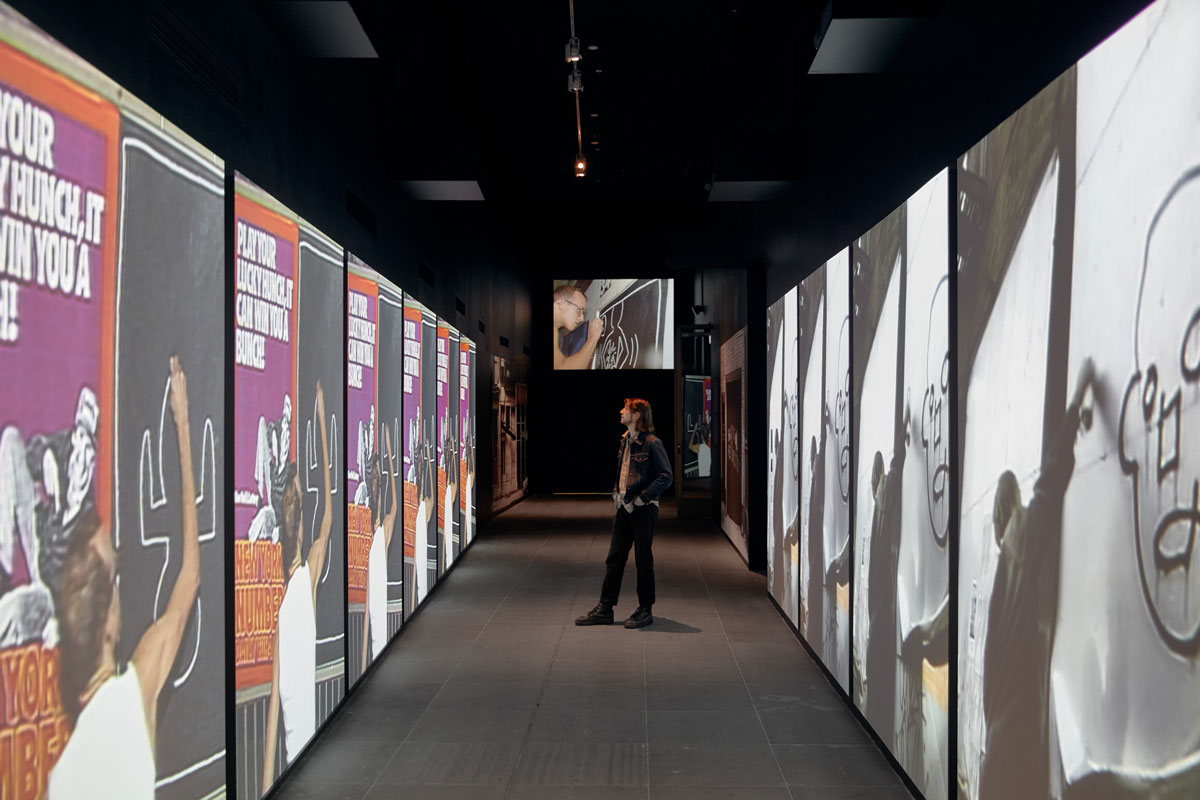 Both personally and through their artistic practice, there is a large bank of screens occupying an entire wall. These screens play a sequence of footage that highlights many of the artists’ collaborations with musicians, dancers and other creatives, including Madonna, Grace Jones, and even MTV. This display of video footage illustrates the interdisciplinary practices of Haring and Basquiat, which span fashion, theatre, dance and music.

5.    In the final section of the exhibition, there is a wall dedicated to moving tributes created by Haring shortly after Basquiat’s unexpected death in August of 1988. 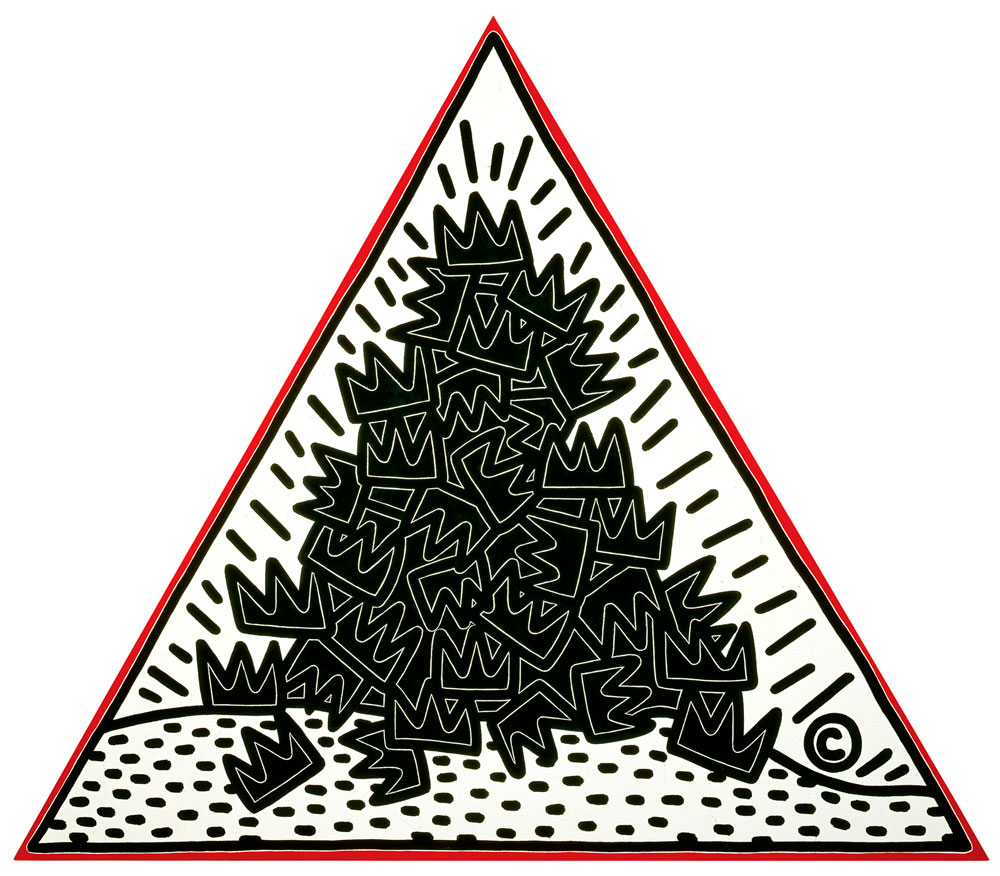 Special thanks to Meg Slater and the team at The NGV for their time, assets and expertise in putting this feature togther! For tickets to Crossing Line click here! Crossing Lines runs until April 20th!

To complement Crossing Lines, the NGV will be running a dedicated schedule of programs featuring talks, behind-the-scenes tours, and one-off events, running from February 6 – April 20! Check them out below: 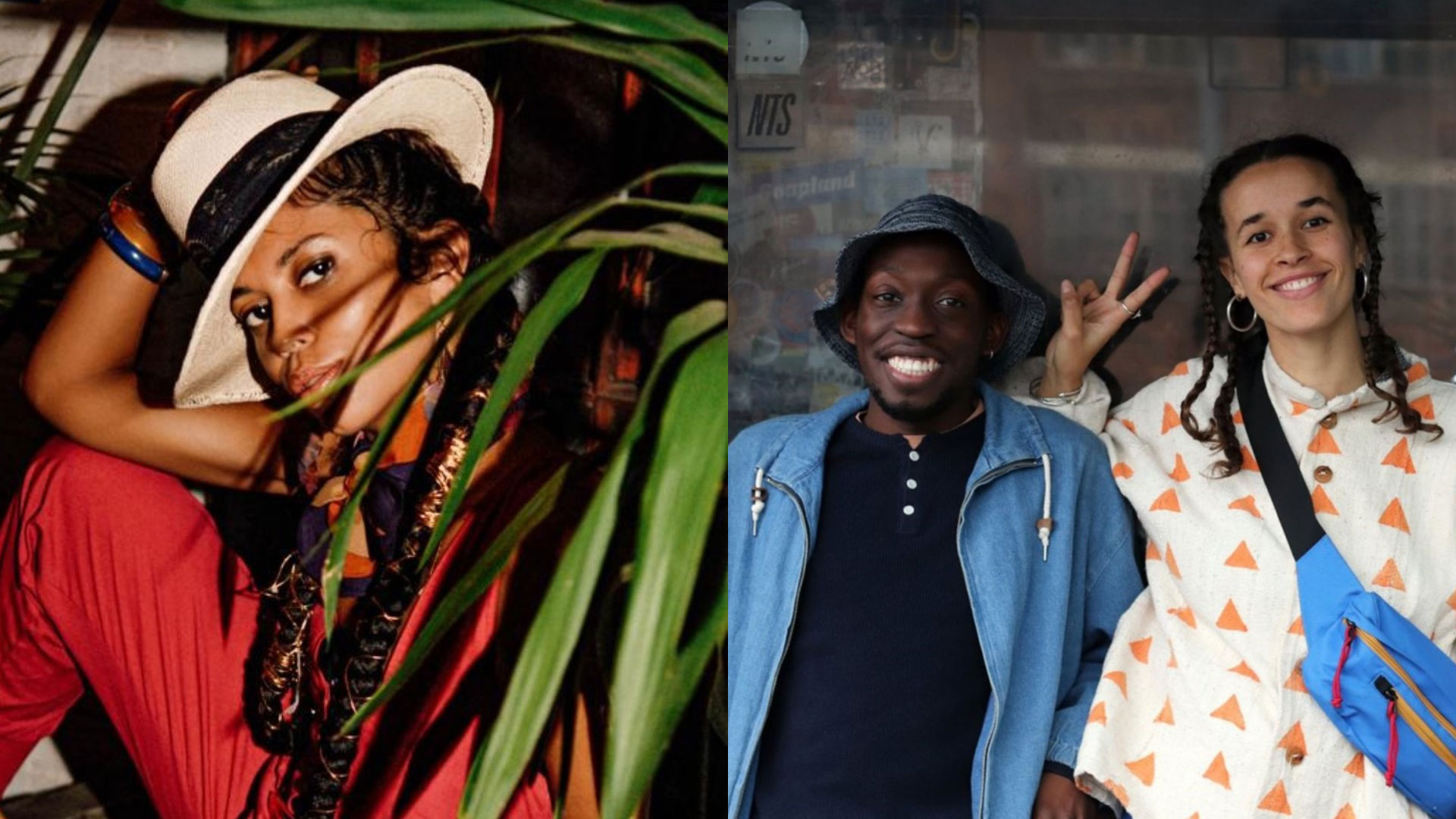 THE CITY WRITES TO ITSELF PRESENTED IN COLLABORATION WITH STILL NOMADS

Understand the artworks in the exhibition against a local Melbourne context and the ways Haring and Basquiat influenced global street culture.

afrOURban, Evanescence Inc and Still Nomads are comprised of artists, curators, architects, placemakers and film makers documenting the culture, architecture, urban spaces of the African continent and its diaspora”. 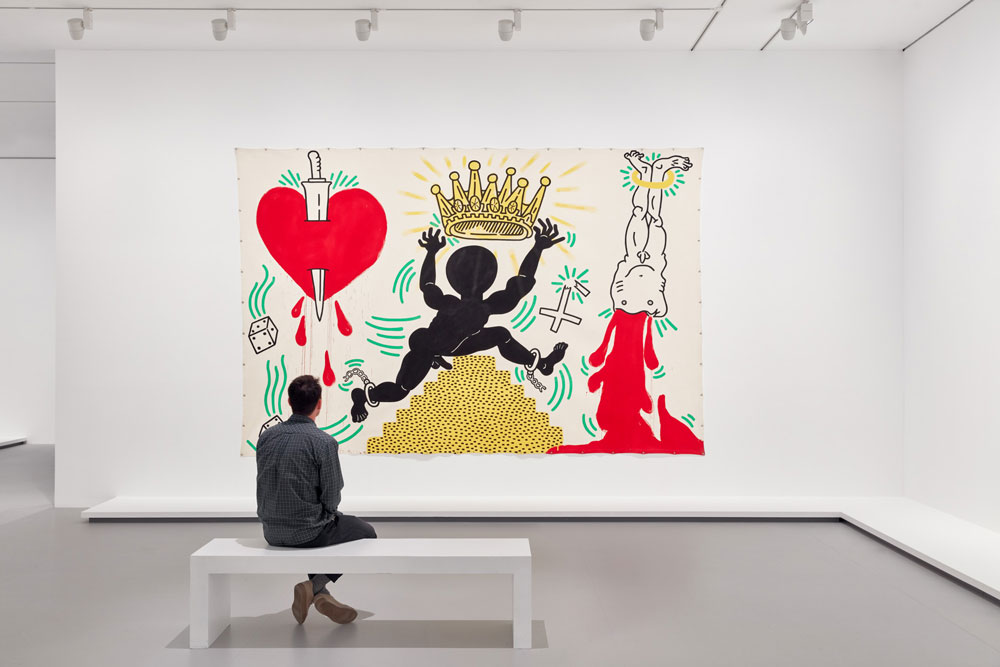 “During his visit to Melbourne in 1984, Keith Haring undertook a series of public works including a now-iconic mural in Collingwood. Six years later, on 16 February 1990, Haring died at the age of thirty-one from AIDS-related complications.

The mural, which is now heritage-listed, internationally recognised and a beloved cultural landmark, is currently being restored by independent not-for-profit organisation Contemporary Arts Precincts Ltd, with a team led by Italian conservator Antonio Rava and American conservator Will Shank.

Visiting conservators will take part in an in conversation event to reflect on the significance of the mural and the challenges that surround the conservation of a public artwork.