The first of many Lazyfests took place last night, and needless to say, it was breathtaking. It was a marvellous reminder of the power of live music to energise, invigorate and unite strangers from all walks of life, bonding them together in the fire of creation and self expression. Beginning with otherworldly rocker MAYA-A, from the get-go punters were seduced by the desire to dance, exploding out of their seats as they ventured toward the hallowed Mary’s Underground stage. But of course, COVID thought otherwise, thus admirers were forced to contain their boundless energy while standing resolute, although rather unsuccessfully at various points (can you blame us though?).

A beautiful moment that summed it all up was the sneaky cover of CLAIRO’s ‘4EVER,’ as fans were further enchanted by the songstress’ many spells as all totally lost themselves to the moment, swaying and singing blissfully unaware of the countless regulations hanging over their heads. It was perfect. By the end everyone’s out of breath, but alas, it was only the start of the night..

Then came The Lazy Eyes , the four young rockers cool, calm and collected, but obviously excited beyond all measure. Once again seats were no option, the floor becoming flooded with a sea of bodies as all bundled tight for the head banging set to come. And of course, the students of the psychedelic fired on all cylinders, belting out tunes like ‘Tangerine,’ ‘Cheesy Love Song’ and the most recent ‘Where’s My Brain?’ All are delivered without a hitch, each and every beat prompting an even more fiery collective head-bang from the crowd. But, the masters of energy slow it all the way down toward the end, getting low as the crowd followed suit, breaking down and building up the final tune as punters waited on the edge of their, well, definitely not seats. Of course the crescendo comes, and all are swept up into inter dimensional bliss as the rockers launch out of their set, a set that the word entrancing doesn’t begin to do justice to.

Finally comes Wollongong R&B heartthrob Stevan, him and his cool AF band emanating waves of steeze as soon as they hop onto the stage. Jamming out the various hits he’s curated over the years, the mind-melder looked like a seasoned veteran upon the stage, completely in control of the crowd as he serenaded them into sublime soul. Naturally, hits like ‘Onyx’ and ‘No More Regrets’ absolutely went off, keeping the crowd energised after the impossibly high octane sets that took place earlier. But of course, this is Stevan we’re talking about, and he slowed things all the way down with the perfect cover of choice: Daniel Caesar’s ‘Japanese Denim.’ Every word has the crowd screaming atop their lungs, the steady guitars and drums seeming to only amplify them as they bust out nostalgic lyrics like ‘My blue jeaaaans.’

But that wasn’t the only trick the soul-flare had up his sleeve, inviting MAYA-A and The Lazy Eyes back on stage as all jammed out together to send it into the night, taking turns riffing, dancing and just having a total blast as they treated us all to a impromptu-jam sesh that was filled with gorgeous improvisation. But all good things must come to an end, and finally they come to the inevitable conclusion.

But don’t get me wrong, it may have been the end of the night, but not the end of MAYA-A, The Lazy Eyes or Stevan, all of the youngsters proving that they’re all unquestionably destined for superstardom, to pack out stages beyond their wildest dreams, to help carry the torch of live music on for the next generation. Of course though, don’t just take our word for it. Do yourself a favour and catch up on all the action via the gallery above. 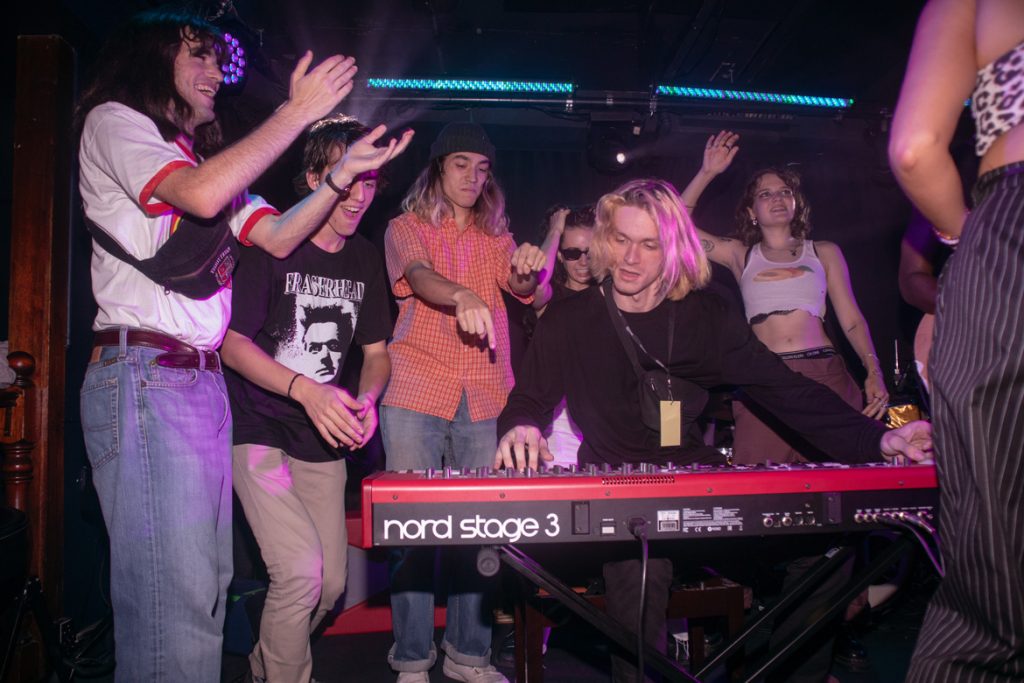