Following the release of their ultra-enjoyable album Internal, Canberra lads SAFIA geared up for their biggest headline tour to date, taking Set Mo & Running Touch along for the ride.

Given that he’s shot for them countless times before, we sent LWA recruit and yung stud himself Brayden Smith to capture a TwentyFour piece with the band. After all, their live show offers a lot more than most electronica acts – with vocals, drums, guitars and lots of confetti. Hooray for real instruments!

We hit the road with SAFIA to shows in Sydney, Melbourne and Brisbane with a little bubble soccer and lots of banter sandwiched in between. See how the SAFIA boys get it done below: Getting on the pre-show Chardonnays with SAFIA and house bros Set Mo in Sydney. Shouts to Nick for the all-white fit, very brave and very powerful move. The view from the floor during soundcheck, with the holy trinity of SAFIA in full swing. Ben practising his performance face in the mirror and getting the pipes ready to sing some sweet, soothing melodies. Showtime! Harry on them sticks. Michael, also on the sticks. Ben rewarding those in the front row which a much-deserved high-five. Boom, never washing these hands ever again. It’s actually insane how psyched everyone gets over confettti. With that being said, we do love colourful bits of flying paper every now and again. Brothers in arms, standing in a sea of sweat and confetti. After a successful sold out show, the only thing left to do is unbutton those shirts and ignorantly pop bottles in the kitchen of The Enmore Theatre. Props to Ben for drinking out of a fancy mug. The next day is a public holiday, so we what any self-respecting Australian does on a day off: Jump inside a large inflatable sphere and play bubble soccer. The ever-important team selection process underway at the picnic table. Notice how everyone has their serious faces on? We make it to Brisvegas. I’m not sure what gang signs SAFIA are throwing up right here, but I want to be jumped in ASAP. The Tivoli looking super dramatic and nice at soundcheck. Oh yeah, it’s Michael’s birthday! Major props to him for actually turning up to work and not chucking a sickie on his birthday. Here’s a cake with delicious and legible writing on it, save us a slice or two. Packed to the bloody rafters. We then fly to Melbourne for a show at Festival Hall – the boys are reflecting on how they supported Lorde here two years ago, and are now headlining the venue themselves. How time flies. *Wipes tear* Filling our hipster quota and taking a photo of some polaroids. #PhotoOfAPhoto Afterparty vibes flowing on the decks, these lads really can do it all. .. And straight into LWA HQ for an interview. Shouts to our intern Sophia in the cut for providing some quality banter, and thanks to SAFIA for letting us tag along around the country. If you haven’t already, give their album Internal a spin, it’s a cracker! 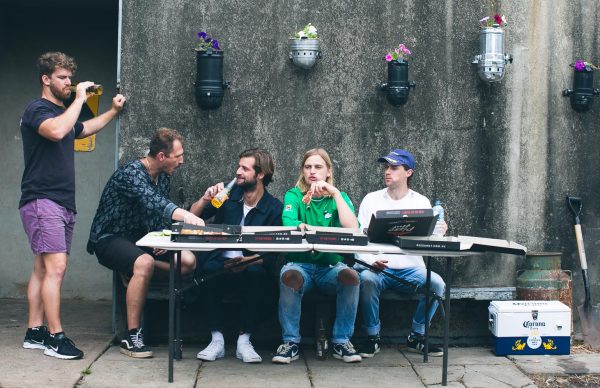