The rising pop sensation gives us the drop on everything ‘Sunroof’…

The indie pop genre is a treasure trove of summer breeze and youthful invigoration. It’s got an age-old lineage wherein some of the biggest stars in the world have indulged. 23-year-old California native Nicky Youre doesn’t have such large sentiments on his mind however. Rather, his works revolve around a genuine love of the craft and escapism, a motif that’s ever present throughout his music and demeanour

His latest single ‘Sunroof’ is flush with such sensibilities, the young muso doubling down on his summer-pop inclinations for a carefree ode to adolescence and young love. Defined by tenor vocalisations, laid-back lyrics and uplifting instrumentation, the track is a blissful embodiment of California daydreaming, and is no doubt the first of many hits that lie in Youre’s future.

We caught up with the LA sensation over Zoom to chat about the new single, California daydreams and songwriting in the age of TikTok. Check it below.

I saw you recently turned 23 the other day. What’d you do for the special day?

I don’t think I did too much. I think I just went out and got a little tipsy and that was a good time, but I did just go to Cabo with my girlfriend last week actually to celebrate, so that was nice. Just relaxed, hung out by the pool, and drank a lot of Pina Coladas [laughs].

It’s a pretty cool time to be in your early twenties while having a hit song out. What’s it been like?

It’s a super crazy feeling. Firstly, it’s really reassuring because I’ve been doing music for a couple of years now. I’ve always felt pretty decently confident in it, but the first three or four years were just full of terrible music [laughs]. And so, now that I’m able to put stuff out and people are enjoying it, it’s just reassuring for me to be like, “Okay, maybe I’m doing the right thing with my music,” which is super dope.

And on the other hand, it’s super stressful, because I’m like, “All right, now I’ve got to try and find another song that’s going to top that.” Even though I can’t have that mindset, it’s hard to not think that way. So, it’s been tough, but it’s been really good. It’s been really exciting.

What was the sunroof experience that inspired this track?

Not really [laughs]. The sunroof in my car is actually broken, so I haven’t had a true sunroof experience in a hot minute. But I think one night I was just feeling really sick and for some reason the word “Sunroof” came to mind and now that I look at it, I think of it as, “What better feeling is there than having your hands and your head out of a sunroof, just vibing to some music?” And I think just subconsciously I wrote about that.

It really reminds me of that scene from ‘Perks of Being a Wallflower’ with David Bowie. Was that a reference point?

A lot of my stuff is subconsciously written. I don’t write in super deep detail because I’m just making pop music. And for me, that’s just how I do it, but that’s one of my favourite movies, and it definitely reminds me of that scene when they’re standing on the back of the car.

The teenage summer bop has been done so well so many times over the years. How did you manage to differentiate ‘Sunroof’ from the masses?

I think it was written at a point where I just wasn’t trying super hard with my music and I was just writing purely for fun. And it just came out to me one day when I was in my college room.

This past year at college was the best year of my life. I feel like I really grew as a person during that year. So, I think it was kind of an awakening moment for me as an artist to become who I am. And I was just having fun with everything and I think that’s why it feels good because I was feeling really good at the time.

The song itself sounds like a California daydream. For our Aussie readers who are yet to visit the City of Angels, would you be able to enlighten us as to what it’s like?

I imagine it’s probably pretty similar to Australia. I actually have a good amount of Australian friends because I played water polo for 12 years and I had a good amount of buddies that would come and come over from Australia and play in the States with us. And they would tell me similar stories to what we have in California.

Just sunny days and good vibes and everyone partying and having a good time. But yeah, I grew up like 10 minutes from the beach, so I definitely think that’s been a part of my music influence for sure. Just making it easy to listen to stuff that I can put on when I’m at the beach and don’t have to think too hard about anything.

I’ve read that your songs come from humming melodies that pop into your head. It sounds pretty effortless. When ‘Sunroof’ popped into your head, what was your reaction?

I remember I was just trying to write and another melody came to mind and I was messing with that for like 15 minutes. But then I was like, “All right, this sucks. Let’s write something else.” And then the next thing that came in was ‘Sunroof’ and instantly I was like, “Oh, that’s kind of sick. I’ve got to finish it.”

It was such a cool idea that just randomly popped into my head. And so, it just came to be. And once I was done I sent it to my producer and here we are 23 different versions later. We took so long with it because I knew it was super special, at least it is to me. So I was like, “It has to be as close to perfect as I can get it.”

I can imagine each of those 23 versions would almost be like a song baby in a sense. How did you decide which one out of the bunch will be the final version?

It’s actually super hard [laughs]. I don’t think people realize how hard it is to finalize a song. Finishing songs is something I definitely, I don’t want to say struggle with, but it takes a minute for me to be like, “All right, this is the one.”

But for ‘Sunroof’, there were just small tweaks, like with drums or the key. It was originally in a lower octave and the energy was a lot lower so I wanted to make it more fun. Then I got this version back and I was like, “All right, that’s the one”.

Just on that sentiment of having a pressure to top what you’ve done. Now that ‘Sunroof’ is out, are you planning on staying in this pop lane? What lies on the horizon musically for you?

Well, I have an EP that’s going to be coming out in the next couple of months. I have so many songs right now because I’ve been doing so many sessions, but I definitely want to stay in the fun lane of ‘Sunroof’ while switching it up here and there.

I have some more singles as well that are, I wouldn’t say rocky, but just fun and exciting, in a different way. It’s almost in an angrier way as well. But I don’t know. I think the stuff that I put out, at least for the next little bit, will always be a good vibe.

It’s also a song that’s been exploding on TikTok. When you’re writing, do you ever have that aspect of social media in the back of your mind?

I never want to have that mindset because I want it to live outside of TikTok. But I definitely have had phases of being like “Okay, we’re doing this because of TikTok”, but I think now I make a song and it’s like, “Oh, this might do super well on TikTok because of some elements that just came in naturally.” And I think that’s probably what’s going to be the best way forward, at least for a while.

Anytime you’re in a car with a sunroof now, do you ever look up and be like “Yep. That’s my song”?

I actually haven’t thought too much about that, but I definitely will, now that you’ve mentioned that. There are little things though. Like I can’t listen to certain songs the same way now that music’s my full-time gig.

I’m thinking about music and TikTok and all that stuff all the time now. So it’s an interesting thing, but yeah, I’m definitely going to think of the song whenever I see sunroofs now, that’s for sure.

Will you fix your own sunroof by any chance?

I’m guessing you can probably afford it now!

Now, when are you coming down under?

I don’t know yet [laughs]. I need to make it out there for sure though. I’m just starting some shows this year. I have a couple next month and then I will be doing some more hopefully opening for some other acts and things like that.

Lastly, obviously you’re naturally inclined toward songwriting. For anyone who might be developing their songwriting muscles right now, do you have any tips or advice for them?

I think it’s good to rely on your friends that are artists as well, and just try collaborations and meet new people that are going to bring different things out of you. I think that’s super important. And that’s helped me over the past couple of months in terms of staying creative and things like that.

But whenever you’re struggling, sometimes you’ve just got to know when to try something different. Sometimes it’s good to make something entirely different that you’ll never put out, but at least it’s refreshing for yourself and it helps get the juices flowing again. That’s what I like to do at least!

Nicky Youre’s new single ‘Sunroof’ is out now. You can buy/stream it here. 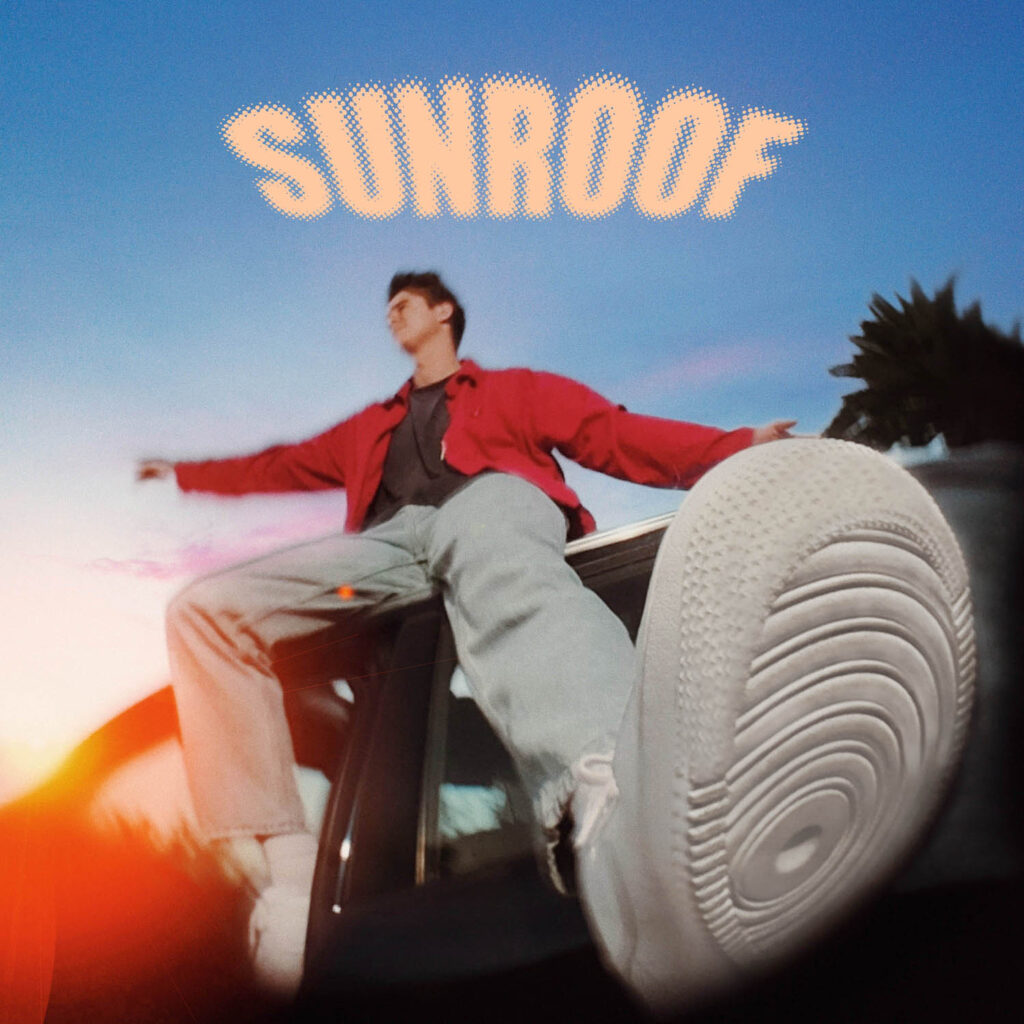