Contrary to the title, the song is far from shit…

Turpentine Babycino are coming through with the ultimate breakup record this Wednesday, the Novacastrian four-piece releasing their latest heater, ‘Write A Song Sound Shit’. Originating from the steel city of Newcastle, the band’s sound is defined by unabashed punk and ’90s fuzz, and their new tune is proof that rock is anything but dead.

Driven forth by fiery guitar lines and chaotic drums, the heater is rife with the quintessential attitude inherent to the Newy music scene. Singer Georgie Winchester’s vocals are on fire in this cut as well, singing about the inevitable spiral we’ve all endured after a failed relationship with equal measures of emotion and grit, particularly on lines like, “Wake up, forget/Do stuff, I regret”.

The video for the record is equally as frenzied as the sonics, with the visuals following the four-piece as they throw a huge party in their share house, in a bid to forget their lost loves. We’re treated to plenty of scenes from the festivities as well, with the various members of the band shown skulling beers, swapping outfits and even face planting into cakes in a series of hazy flashbacks. It’s definitely reminiscent of those typical parties you’d see in American college films, except through an Aussie lens that’s far closer to home.

Speaking on the meaning behind the record, the band explain, “Write A Song Sounds Shit’ is about the aftermath of a break-up. Big parties, loud music, long nights and writing shitty break-up songs are often on the cards to help ‘forget’ about an ex”, they explain. “As a song-writer it’s easy to dismiss a great song due to self doubt and judgment and after a break-up, these insecurities are heightened.”

“‘Write A Song Sounds Shit’ is that shitty break-up song that nobody’s supposed to hear, except people will this time.”

It’s another reminder of the talent brewing within Newy’s music scene, along with the power of a good (or shit) breakup song. Be sure to buy/stream Turpentine Babycino’s new single ‘Write A Song Sound Shit’ here and check out their upcoming tour dates below. 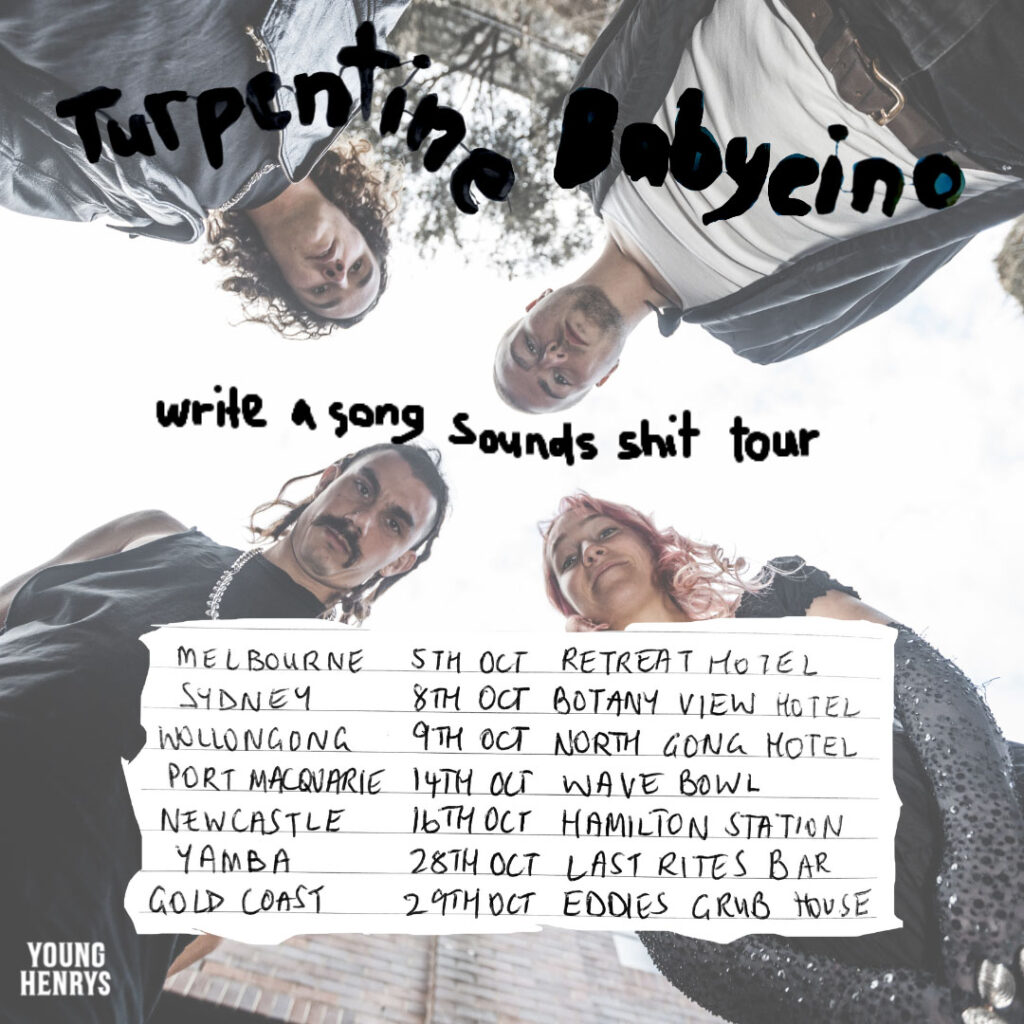