The Cenny Coast outfit serve up a dose of nostalgia and sunbeams.

It’s no secret that 2020 was a bit of a shit show. But, in case you’ve literally been living under a rock with no reception or contact from the outside world, you should probably know that last year was a bad one for humanity and (in Australia) for musicians. Tours were cancelled, venues shut down, and performance in general was largely outlawed – it was like a big ol’ pile of dirty-ass dirt. Now, however, we’re starting to see artists begin to flourish in their natural environment again and we’re stoked to be sharing a particularly vibrant sprout from the dirt of 2020, SOY’s ‘Germinate’.

Dropping the heavy riffery we’ve heard from them on track like ‘Bellows’ and shedding the up-tempo chaotic energy of tunes like ‘Severed Tale’ and ‘Roach Coach Blues’, the lads have slowed things down on ‘Germinate’, delving into the dreamy world of 60s psych. Within the guitar-heavy track, we hear shades of acts like The Seeds, Cout Five and, more recently, The Murlocs. It’s a colourful sonic delight that sounds like it was made to be performed live in the sweaty venues up and down the East Coast that SOY are well acquainted with.

Shot on Super 8 film and edited by Cade White, who is also the band’s drummer, the clip captures the spirit of the track nicely. Here we follow the band as they enjoy the good life on the road: dipping their toes in the ocean, playing shows and monkeying about. Even describing it sounds like a lovely midsummer’s dream…]

‘Germinate’ is the title track from SOY’s forthcoming sophomore EP which is due out April 24th. Make sure you give it a few spins before you catch them live when they hit the road for an East Coast tour over April and May, dropping in at Newy, Wamberal, Byron, Sydney and Wollongong. Check out the dates below and head here to see more of SOY on Instagram: 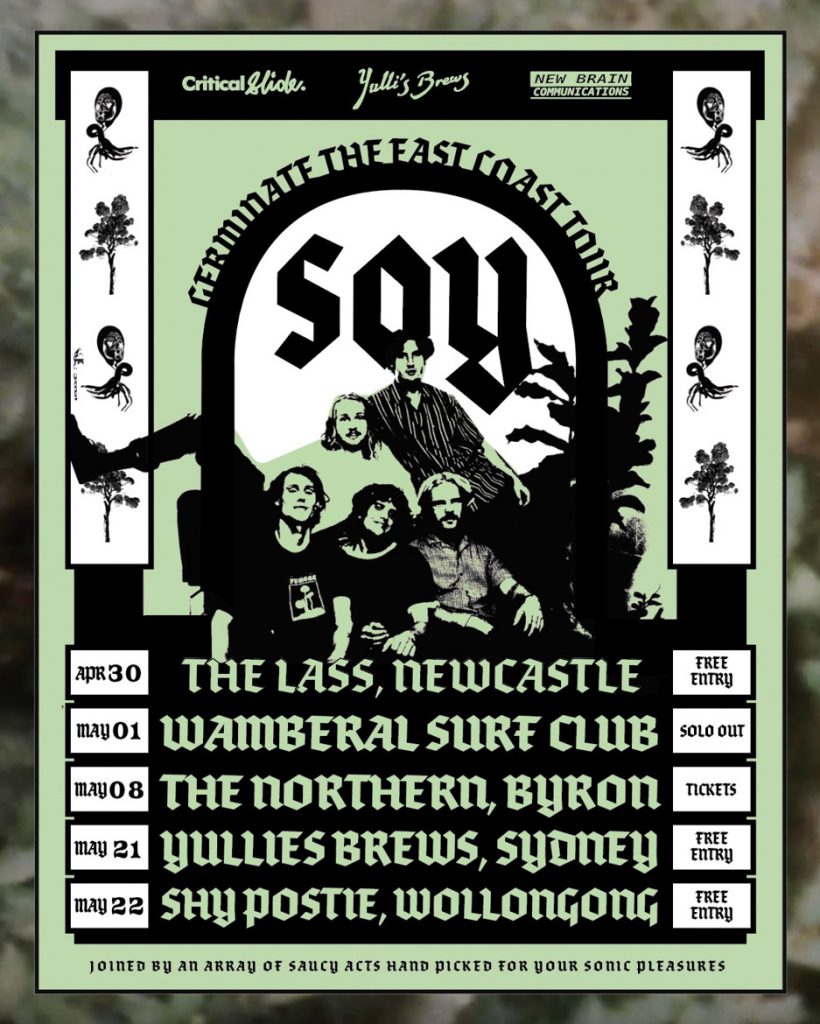 Share this
Video Premiere: Soak Up The Sun With SOY And Their Jangly Groover ‘Germinate’