That’s the message the goons at the beginning of his latest film, ‘Pig’, should’ve learnt before they forayed deep in the Oregon forests and decided to kidnap his beloved truffle sniffing best friend. Written, directed and produced by the power duo Michael Sarnoski and Vanessa Block, the movie was initially pegged as Cage’s John Wick. However, dig a little deeper, and there’s much more on offer here. What is served up is a movie more concerned with the deep personal catharsis, facing one’s past and a slew of mouth-watering dishes. The film iconoclast turns in a performance doused in years of world-weariness; his usual onscreen energy takes a backseat to something far more tender and reserved. Critics and audience alike have lauded ‘Pig’ for the simultaneous return to form for Cage and the dazzling debut of these indie filmmaking gems.

We had a chance to catch up with writer-director Michael Sarnoski and writer-producer Vanessa Block, just as ‘Pig’ hits Australian theatres! 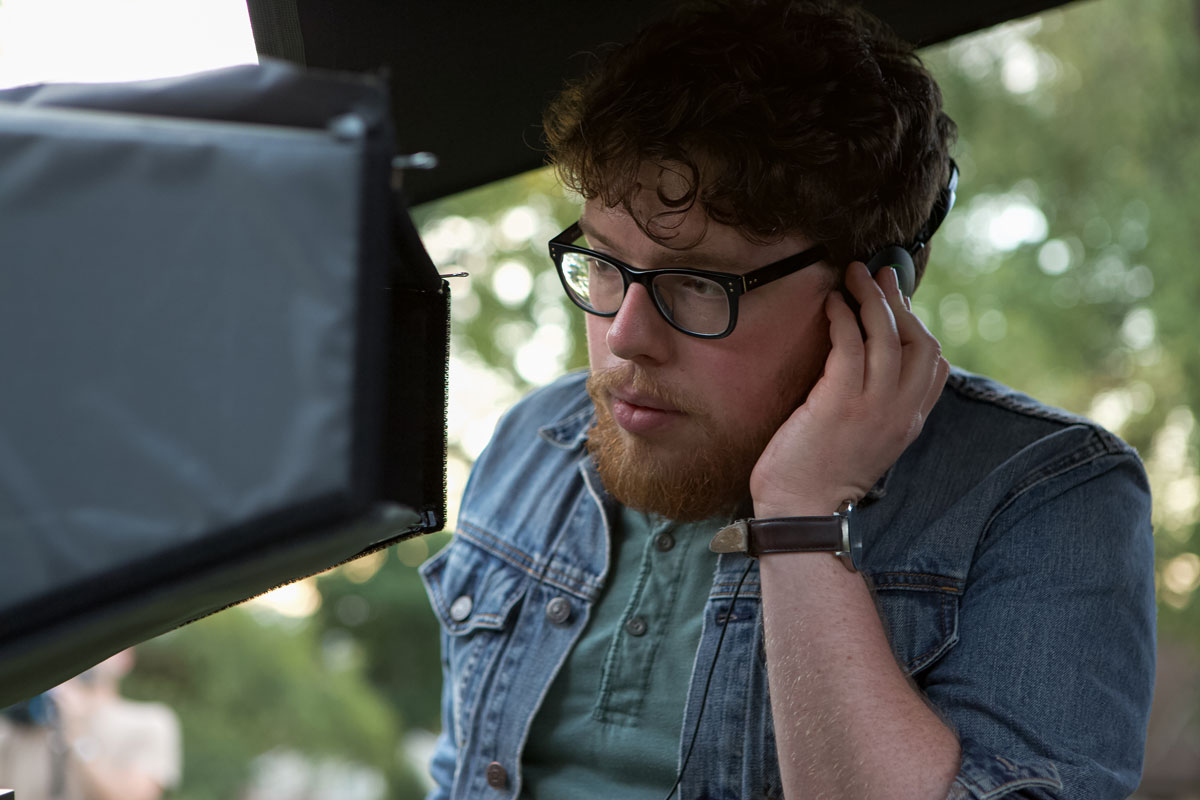 Congratulations on Pig! The film has met universal acclaim from critics and cinephiles alike. How does it feel?

MICHAEL: It feels a bit surreal, but I’m thrilled that people are moved by the film.

VANESSA: To see something that so many people gave so much of themselves to having resonance is gratifying in a unique way. It kind of restores your faith in humanity; that when you make something in earnest, with kindness and respect, the product has a beauty that is felt.

Taking it all the way back, you both met while attending Yale and then proceeded to collaborate on the short – documentary ‘The Testimony’. In those early years, what did you see in each other that would lead to this creative partnership?

MICHAEL: I think our tastes compliment each other well. And Vanessa has an uncanny ability to make things happen, to not take “no”s from an industry that loves to say no, and to work unbelievably hard until creative dreams become a reality.

VANESSA: Creative alchemy is one of those indescribable things. It’s just a synergy that is felt. I appreciated Michael’s taste from early on. Whenever you’re wanting to do something bold and original, you’re venturing into unknown waters and it can always go horribly wrong; that is the potential cost of breaking any mold. To have someone you respect artistically be a filter to your filter is a great way to ensure that you’re creating on the right side of novelty. Michael also had an appreciation for subtlety that was a good counterpoint to my intensity.

In the past you’ve talked about how you were inspired by the image of an old man on a porch, sitting with his shotgun and faithful pig. What was it about this idea that captured your imagination?

MICHAEL: I think the core image of an old man with his pig, alone in the woods, carried a lot of the emotional weight that attracted me to this story. It had the sense of isolation and mystery, but also an endearing element that I wanted to unpack. Much of the writing process was an attempt to understand why that image was so moving and intriguing.

VANESSA: The beauty of film is the power of the image. That static frame alone conveys so much emotion— loneliness, tenderness, loyalty, fragility, humanity. It was a great jumping off point for a film. 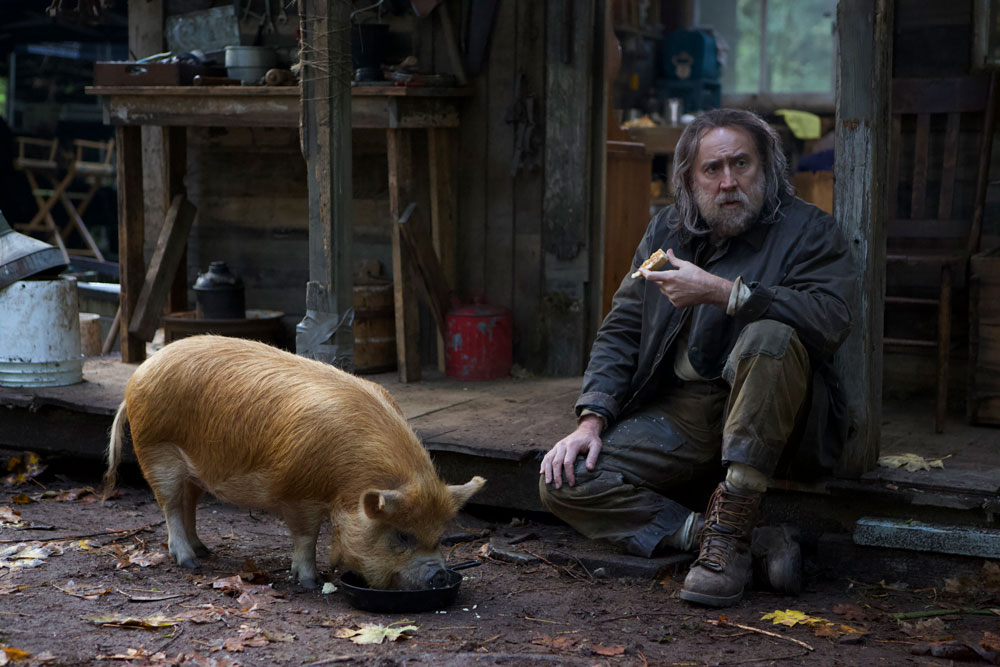 The film really takes you on an agri-food journey. Starting in the woods of Oregon before winding through dining rooms, kitchens, and even an underground fight club for hospitality sluggers. What kind of research went into bringing the specifics of this world to life?

MICHAEL: The research began as a lot of reading and watching documentaries and Youtube and the like, and then evolved into multiple early scout trips with Vanessa, during which we met countless welcoming members of the restaurant scene and Portland community that helped craft the details of the world.

VANESSA: We couldn’t have done it without some very generous culinary masters in Portland, Oregon. Very early in the process we made a few trips to the city to meet with everyone from a prolific truffle hunter, to chefs of varying cuisines, to food critics. We wanted to ground the film in the authenticity of the food scene that is specific to Oregon and many of these individuals would go on to be consultants on the film. All the dishes you see cooked in the film are based on real recipes provided by these local Chefs. 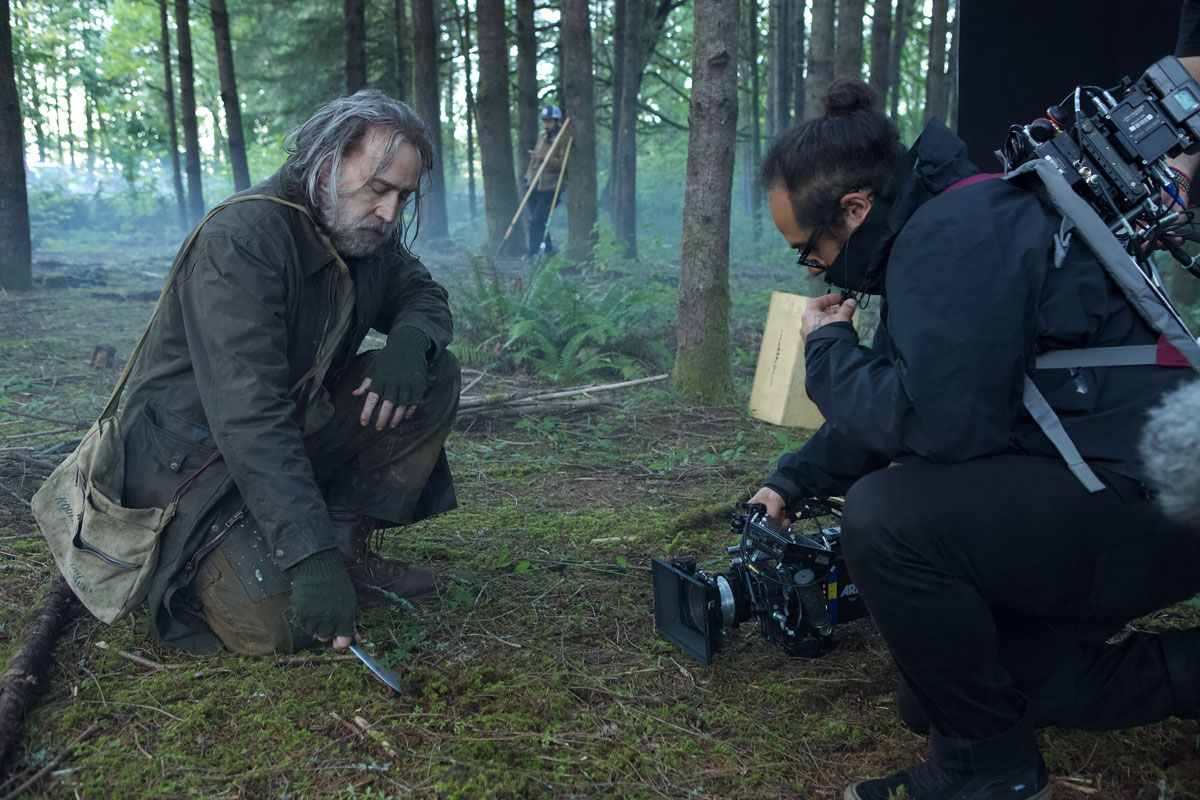 We can’t talk about Pig without talking about the casting of film icon Nicolas Cage. How did this come about? Did this change the shape of the film in any way from that point on?

MICHAEL: Nick was suggested through his agency (WME), and when he read the script, he immediately responded to and understood the material. He just seemed to get the character and the tone, often comparing it to a poem, and it was immediately clear that he was perfect for the role. The character wasn’t specifically written for anyone, and we didn’t rewrite or reshape for him, but rather worked together to bring the character from the page to life. He filled the part with so much intensity, soul, and artistry, and brought Rob to life better than I ever could have hoped for.

VANESSA: The beauty of Nick’s involvement is that he had a reverence for the script from the very first read. He had no desire to change the words on the page. For him, it was about where he was in his life at the time and how he felt he could seamlessly inhabit the character of Robin Feld. 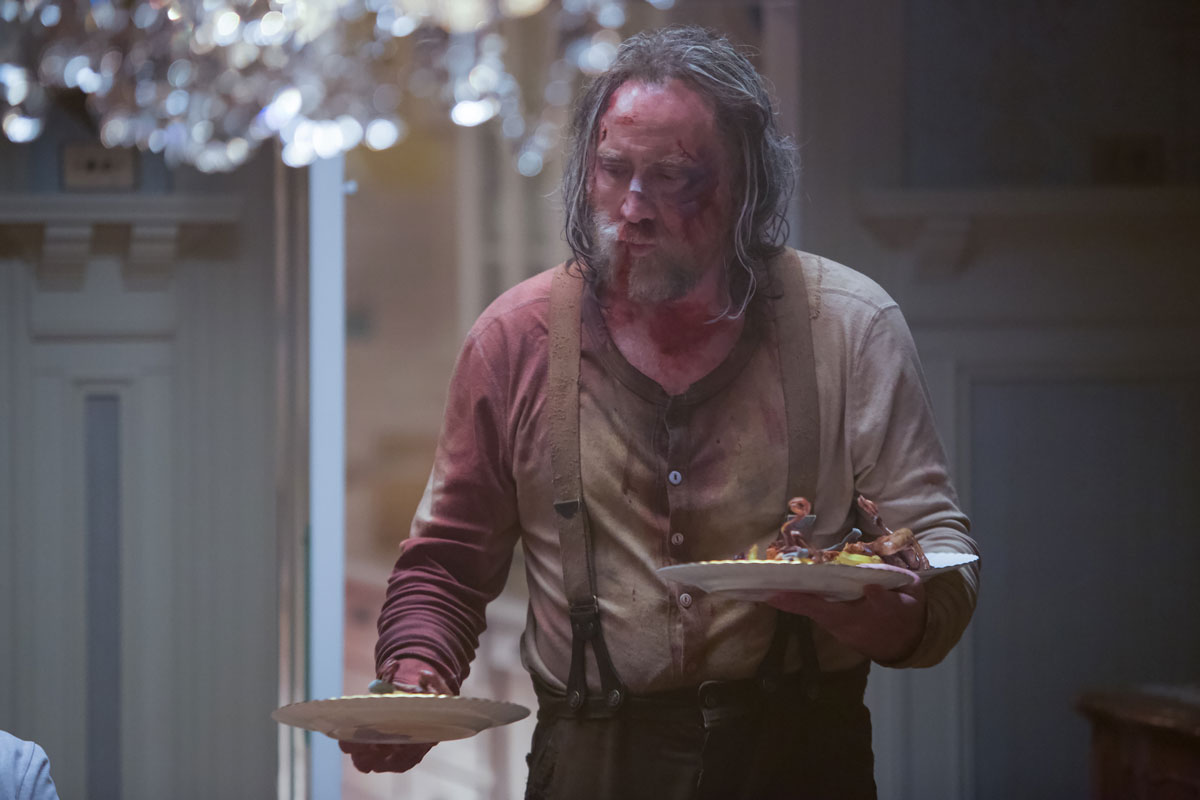 I think that audiences will be surprised with Cage’s more somber turn in the film. What was the process like of ascertaining such a powerful performance?

MICHAEL Nick has never phoned in a single performance in his life. He studies the script like a scholar, and goes all in to explore and craft a character. He spent time getting to know Brandy (the pig), worked with the local chefs to learn the recipes and techniques, and really went inward to find the soul of Rob. Much of the character was left unspoken even between us, but he just latched onto something and needed very little guidance. He’s a pro and an artist, and he exudes that in everything he does. I think those abilities translated well to embodying a chef, as you can see the focus and care with which he treats cooking as he does everything else.

VANESSA: The brilliance of Nick’s career is, in part, based in the scope and variety of his body of work. He’s taken risks no other actor has, and he’s done it by design and with courage. The power of his performance in PIG lies in him giving himself up to Rob fully and completely and having confidence that in the quiet and subtlety of the performance tremendous humanity could be conveyed. It took an actor with a certain intensity and electricity to pull this off given the introspection of the role and he did it very intuitively.

Most of the scenes in the film centre around Cage and Alex Wolff’s playing off each other. What was it like seeing their chemistry develop from behind the camera?

MICHAEL: Nick and Alex’s chemistry was one of the most pleasant surprises of the whole production. You just can’t plan for something like that. Alex got into acting because of Nick, and brought such enthusiasm and passion to the whole process. There was a mentor relationship, a sense of healthy competition but also deep support, and a beautiful friendship that developed. Both of them were at the top of their game, and their dynamic in real life translated into a wonderful and charged energy between them on-screen.

VANESSA: It was fun and endearing watching the friendship that developed between the two of them. Alex Wolff’s reverence for Nick as an actor was additive to Amir’s curiosity about this mythic chef. There was an element of the art imitating what was going on behind the scenes between them. 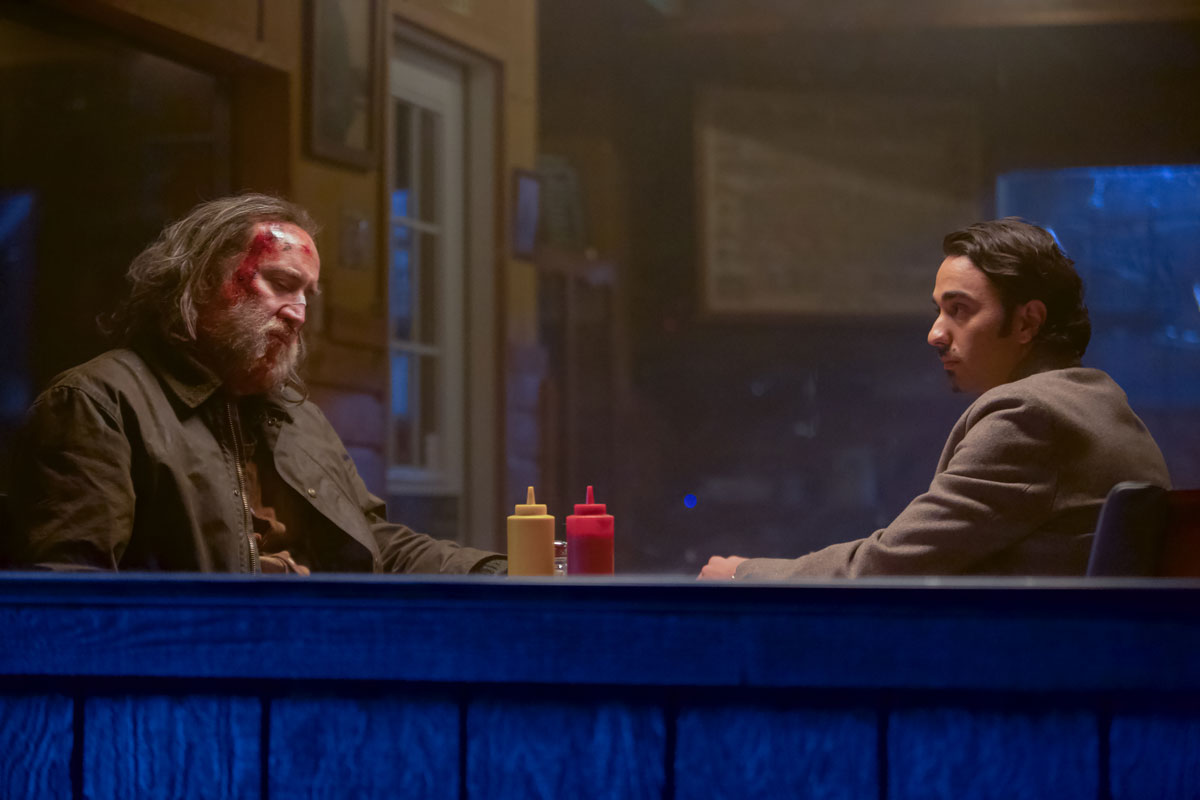 Now that we’ve talked about the film’s two-second leads, let’s talk about the real star Brandy, who plays the foraging pig. What was the process like of finding her and then working with her?

MICHAEL: We couldn’t afford a trained pig, so Vanessa and I went to various pig farms around Portland to find our star. Brandy had a unique soulfulness in her eyes that was undeniable, and she’s just freaking adorable. She’s a kunekune pig, which as a breed are really something special. Because we only had a little time to train her, mostly we focused on Nick spending time with her, so she knew to go to him for treats. Trained movie animals are more accustomed to sets, which can be very hectic and loud, so on the days she was present, we made sure to be extra calm and quiet. All of this added up to a very authentic performance from Brandy. She didn’t know any tricks, so when you see her, she’s just being a pig. Beyond that, it was all in the editing by Brett Bachman and Jan Kovac.

VANESSA: There was no day I was more excited for in this entire process than the day we toured pig farms in search of our star. Pigs are ridiculously cute, intelligent creatures. Since we were working with such limited resources, our production couldn’t afford a proper “movie pig”, so the search of Oregon farms for a pig we might train ourselves began. Brandy, with her auburn fur and soulful eyes stole our hearts, but she was challenging to train. Luckily pigs are entirely food motivated, so we were able to get the coverage we needed, but not without a few people getting bitten.

Both of you have created such a rich piece of work within the limitations of indie filmmaking. What would be your biggest pieces of advice for aspiring directors and producers for getting their films made?

MICHAEL: Don’t make something just because you can or because you think it’s what people expect or want of you. Make something because you care about it. And if you can write, write something only you can direct. Beyond that, just be as respectful and open as you can to everyone on set, because everyone can have great ideas and deserves to be listened to.

VANESSA: Trust your gut. If you believe you have a story worth telling, never, under any circumstance, allow anyone to tell you no.

To wrap things up, do you have a message for Australian audiences before they see Pig?

MICHAEL: I’m not much of a message person, but it’s been a rough couple years, so I hope you find some connection and solace through our film. We’re all in this together.

VANESSA: Just that I hope the film makes you feel a little less alone in this crazy journey we call life.

Thanks to Michael for his time and to the good people at Madman and Nixco for making this happen. ‘Pig’ is in cinemas from today! Find ticket info here.

Share this
Interview: We Caught Up With The Director and Producer Of Nicolas Cage’s Latest Film ‘Pig’
Editors Pick