NFTs have turned the art world upside down. From the welcomed disorder have risen artists who have adapted to the new space and thrived in it.

Lucius Ha is just that.

Ha is an Australian-based artist whose meteoric rise within the crypto-art scene is astounding and inspiring. His journey began far from the blockchain. He initially gained interest in the space during a fateful internship with Adidas back in 2019. What started as a casual conversation with a colleague eventually blossomed into an outright fixation with the possibilities of art in the digitised world. After selling his first piece in mid-2020, Ha auctioned his pieces on exclusive NFT platforms like SuperRare, Foundation, and Bluethumbs Genesis.

It’s easy to see why art fans have endeared themselves to Ha’s works. Each piece is a portal into his mind where thought-provoking ideas collide into a cosmos of wild iconographies. Ha’s reputation for detail is well deserved, rendering his surreal scenes into mazes of linework soaked in a myriad of candy coloured hues. However, interwoven into his illustrations is an exploration of culture and perceptions of identity. Ha’s ‘Question’ series leveraged the global reach of NFTs to express meditations on his multicultural upbringing to a broad audience.

We caught up with Ha to talk about his humble beginnings, recent successes, and what he wants the future of NFTs to look like! 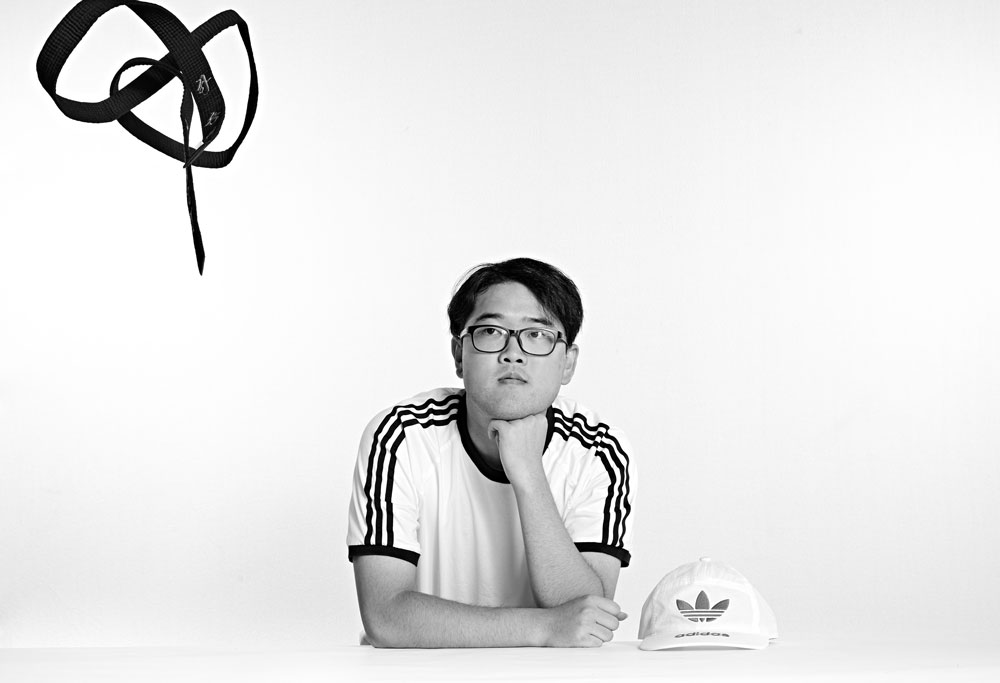 Hi Lucius! Congratulations on all your successes in the last two years. Have you been able to take the time to process everything that’s happened so far?

Honestly, still surreal. I had a completely different direction in life just two years ago. Two years ago, I was still studying at university after completing an Adidas internship in the USA. I had a goal of becoming a footwear innovation designer. So, I worked on my thesis for honours around that goal and direction. Now, I live life as an NFT artist inside a block-chained metaverse. I had no idea that I could be good at it and I had no idea I could even get to this point. Simply surreal. 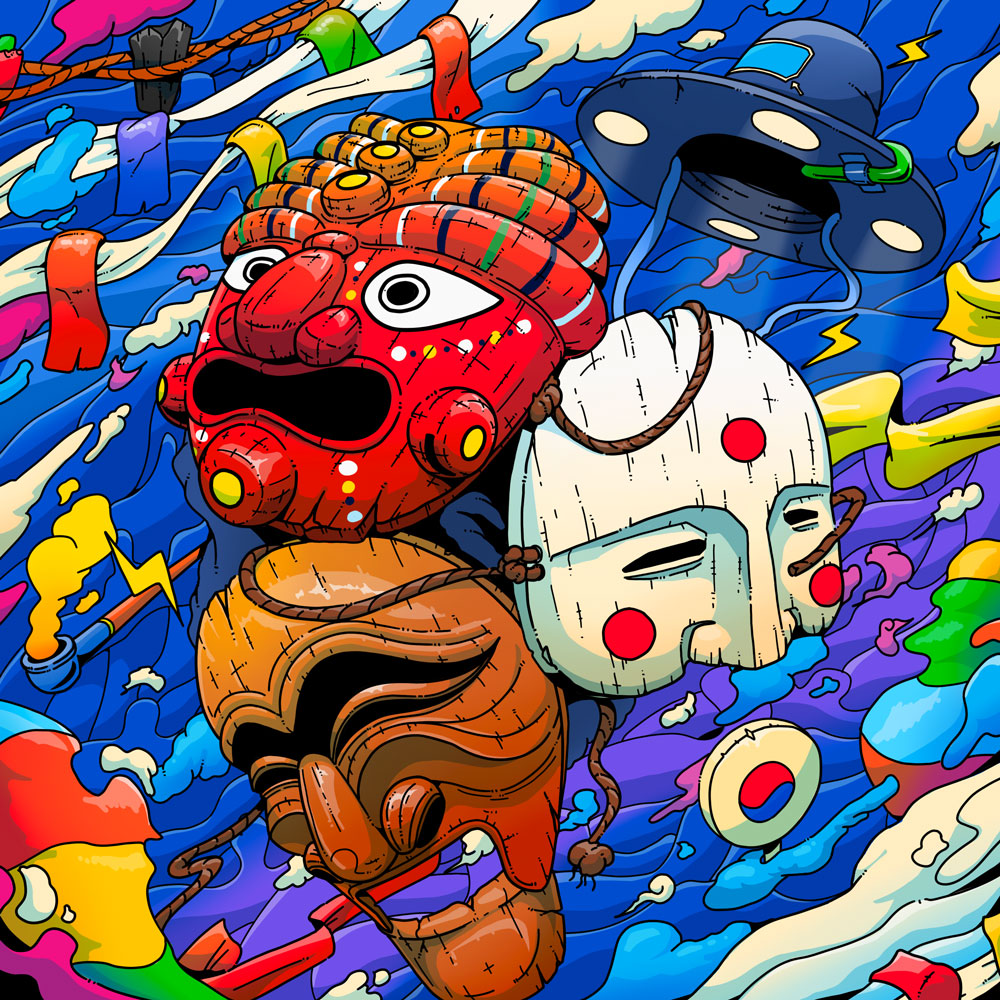 Originally your goal was to pursue a career in sports and footwear design. At that time, had you begun dabbling in your illustrations?

Actually, I started illustrating way before pursuing a career in design generally. I lived with my aunt when I was little and when I moved to Australia. She was an animator who has worked on various animations like; The Simpsons, Spongebob, etc. As a kid, I always went into her room to watch and read animations, manga and her drawings. Then, she slowly started to teach me how to draw small things. Then I started studying art and drawing more seriously through high school by drawing and painting still arts and statues. So, I have been dabbling in illustrations before! 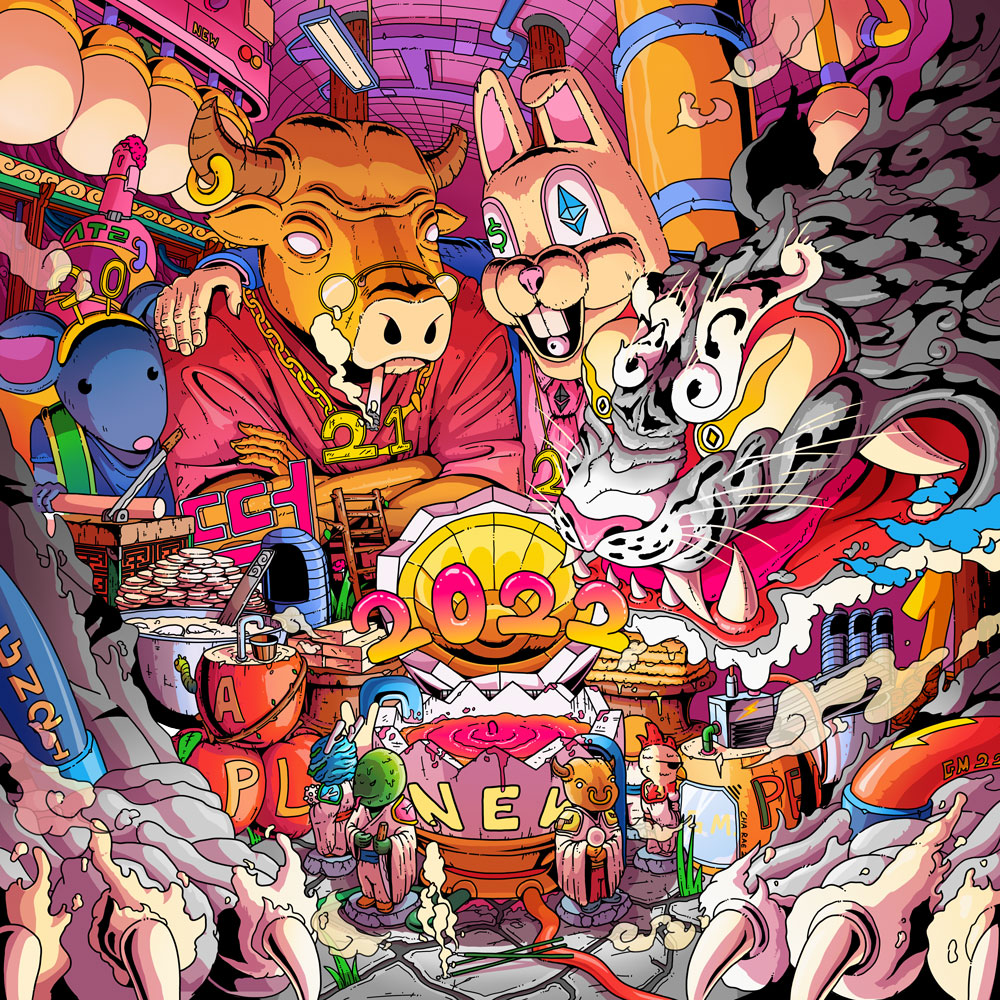 You had begun to immerse yourself in NFTs back in early 2021 before they had gained cultural momentum. What was it about the medium that drove you to learn more and start selling pieces?

I got into Crypto before NFT. I learned more about De-Fi, decentralisation, and the world of cryptocurrency in 2020 December. Then, I created my first wallet back in January. At the time, I was working on album cover arts with my friends (S/O Jon Guisbert and Nick Arneson) I met at Adidas. Nick told me about NFTs and how we should incorporate NFT into our project. I had no idea what it was, I searched so I can join the conversation. During that week, most of my designer friends working in SF posted things about them “minting” works as NFT. Everything suddenly collided, I instantly knew that this is the future and upcoming thing.

There are many reasons I like NFT. But, there are 2 main reasons I decided to be a full-time NFT artist:

Where do you draw inspiration for your unique works?

My first series, ‘Question Series’ was based on questioning my belonging and my true self as 1st generation immigrant. I moved to Australia when I was around 10 years old then I’ve been living here for over 15 years. I had no clue I would come across these difficulties, it was something I didn’t have to think about it. As I travel internationally, I started to find it challenging to answer the simple question ‘where are you from?’. For the series, my experiences and feelings were the main inspiration. Through the series, I’ve met many people who have the same or similar experiences as mine. They gave me comfort, courage and confidence to keep pushing myself to where I am now.

For the style, I always try to over-explain things. Because of that, I add lots of different details to communicate with audiences as much as possible. I enjoy paying attention to the small details and I like audiences to find new things every time they look at them again.

When you set out to create a new piece, is there consideration for what you think audiences might like or do you draw purely from yourself?

I really don’t actually! I believe that art is subjective and design is objective. I’ve studied design to become a designer for 10+ years. Meaning I’ve been thinking objectively for too long. I’m loving exploring a little more on the subjective side right now.

In August 2021, you were listed as an artist in SuperRare! What was that experience like, and what type of emotions were you feeling?

SuperRare is a place that every NFT artist wants to be! SuperRare is a marketplace where curated artists from the platform curators handpicked can be in. Not just that, there are world-famous and most influential artists on the platform creating arts. I applied + contacted by the curators and the feeling was insane. Of course, just entering that platform does not mean I’m on the same level as all those great artists but it was unreal and I got more work to do!

What has it been like to connect to a global community of artists and creatives through NFTs?

Absolutely insane. Before starting NFTs, I used to follow and use their works as my inspirations. Even have them on my mood board! But now I’m speaking to them daily, I communicate and even show my work to them too! It’s normal but every now and then, I think ‘Am I talking to him/her right now?? Really??’ that’s when things get surreal haha. I’m truly happy and learning a lot through their arts and talking to them! I want to shout out to Archan Nair, Seerlight, Ronald Ong and Deekay! As NFTs and crypto-art continue to evolve, what would you like to happen with the space?

Right now, personally, it’s on fire. That might sound good but for me, I think artists, people involved and collectors might burn out. In the beginning, it was almost a land of freedom with no rules. Perfect for non-established artists or artists just starting! But currently, I believe it’s moving too quick (which is awesome!) but around money. I think the best possible way to make this space stronger is to find a way to grow together. Whether that is assisting artists financially or through exposure, finding a more stable system where everyone can find a way to gain not just the capital but something valuable for them. I’m not too sure what exactly it’s going to be. But, I know there are ways and I’m on the journey to make the space a better place. 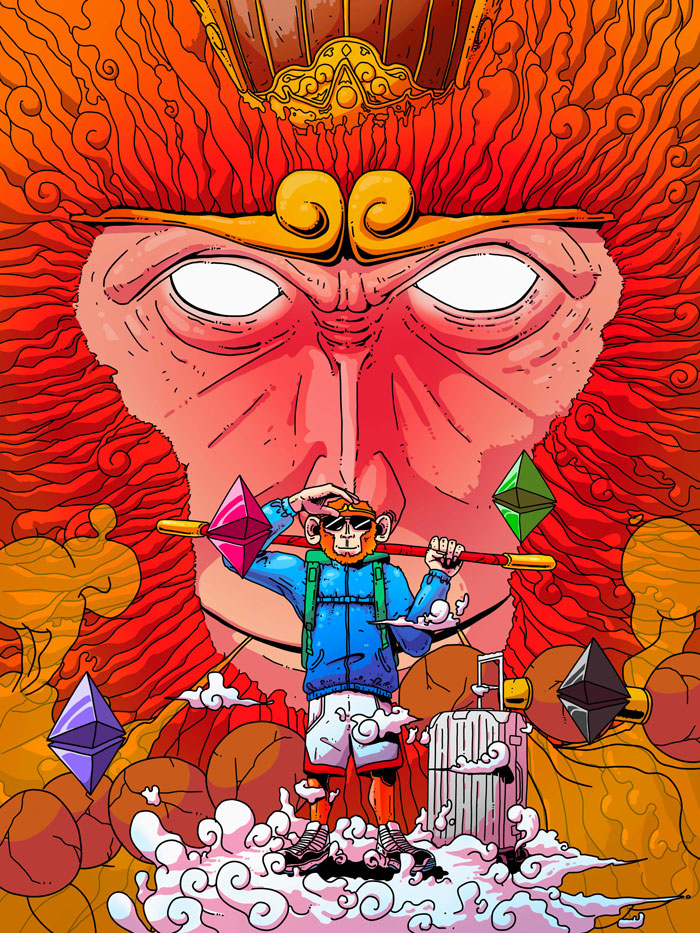 I think what’s amazing about your story is that after graduation, you faced real-world adversities and came out on the other end successfully living the life of a creative. What advice would you give people struggling to find what they want to do?

Thank you so much for putting it in that way!! It was a wild few years and I’m happy to say that everything I did somehow formed who I am now! With every experience I had, Of course, I did think ‘why am I doing this now? It’s so pointless’ but I stuck to it and got over it. This is something my teacher back in the art academy told me, “When you are growing and get better, it never goes in a nice curve line. It’s in stair form. There are times when everything is boring and not working out for you. This is the time for you to realise and focus on things you are not comfortable with. Find the issue and keep working on it. Without knowing, your skills and knowledge will go up and up”. Nothing is easy, but everything you do right now is going to help you.

I’ve seen many people thinking and saying “it’s not possible, nothing is going to change, it’s so difficult, I don’t know if it’s going to work, I’m not qualified enough.” You’ve never done it. If you have, you’ve never put everything in it.

Don’t be scared and come up with random excuses to not do it. You are only running away from it. Just Do It. It’s not that difficult.

Special thanks to Ha for taking the time to chat! You can follow @bluugu. Check out his amazing body of work here. Ha can also be found across and several NFT platforms, which can be found here.