Off The Record
Words by Harry Webber October 9, 2018

We caught up with Sean Caskey of Last Dinosaurs to get the story behind some of his most loved wax pizzas.

With their third studio album, Yumeno Garden, taking inspiration from the ghost towns of Japan, through to the neon cityscapes of America, Brisbane indie-rockers Last Dinosaurs have undoubtedly taken steps to expand themselves sonically and emotionally in their endeavor to create both instantaneous and long lasting tunes. It’s a leap of faith that has paid off big time, with the record proving to be by far their most captivating work to date.

Their latest single ‘Bass God’ charts territory into funk, electro and dance, and is inspired by the coming together of people on a dancefloor. “After a big night out I woke up in the morning feeling very contemplative about a thought I had during the peak of the evening,” vocalist Sean Caskey says. “I was standing on the side watching all the people from different cultures and religions congregate to dance together. This idea just seemed so enlightening and interesting and I was imagining these people being united by a tall, long haired, colourful faced-painted bass rock god playing all the epic bass lines that united everyone in a euphoric trance.”

Last Dinosaurs will be taking Yumeno Garden on the road around the country this March (info here + poster below), but what music inspires them? Check out the licorice disks that have shaped Sean’s musical journey thus far below (please note: Lachie Caskey is also on board modelling the records): 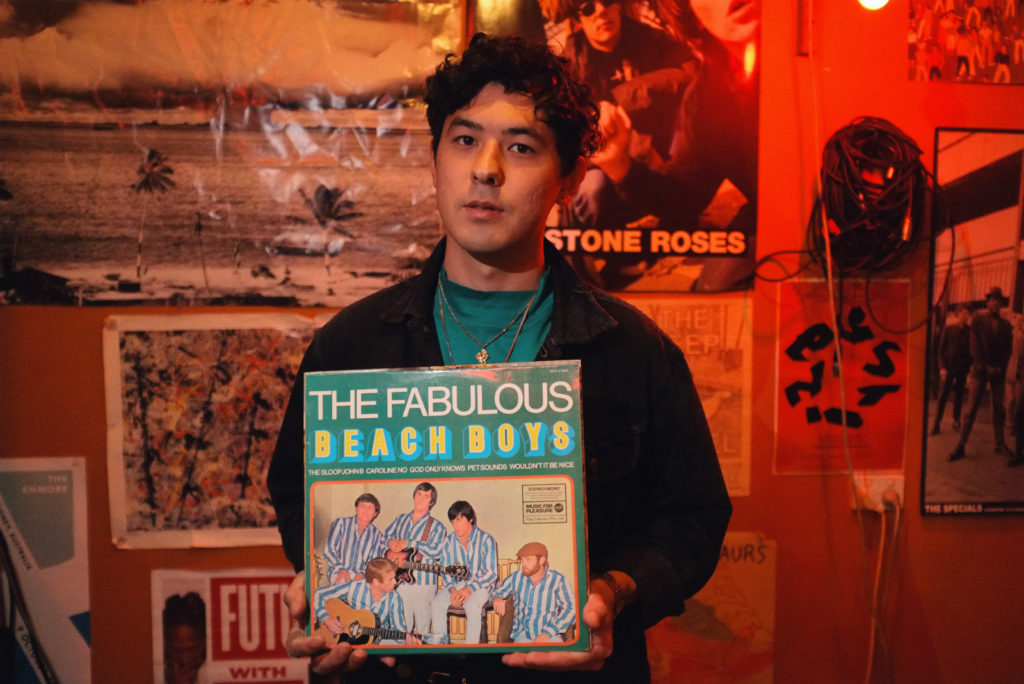 “I was 6 years old and Dad and I were walking around town and checked out a CD shop. I remember I used to love hearing that lottery jingle on TV that used the “wouldn’t it be nice to win a million” so Dad bought me the best of the Beach Boys album. It rocked my world. Back then we were living in a dead part of north Queensland but it was sunny and we were kinda close to Airlie Beach. So that kinda music really stuck a deep chord with me at such a young age. It was an early escape into an imaginary world of girls, cars, and surfing.”

“The Fabulous Beach Boys album is just Pet Sounds remarketed in Australia because strangely (not that strange) this album actually didn’t do very well at all. It wasn’t littered with quick and snappy happy pop songs about cars and such. This album was produced by Brian [Wilson] while the rest of the band were on tour. The depth of this album is what really gets me, emotionally and musically. It’s a masterpiece.”

“It was quite some time later that I got into Pet Sounds, but the timing was perfect because I was in the right headspace to be able to absorb and understand it all. I guess as a kid a lot of it would’ve gone right over my head.” 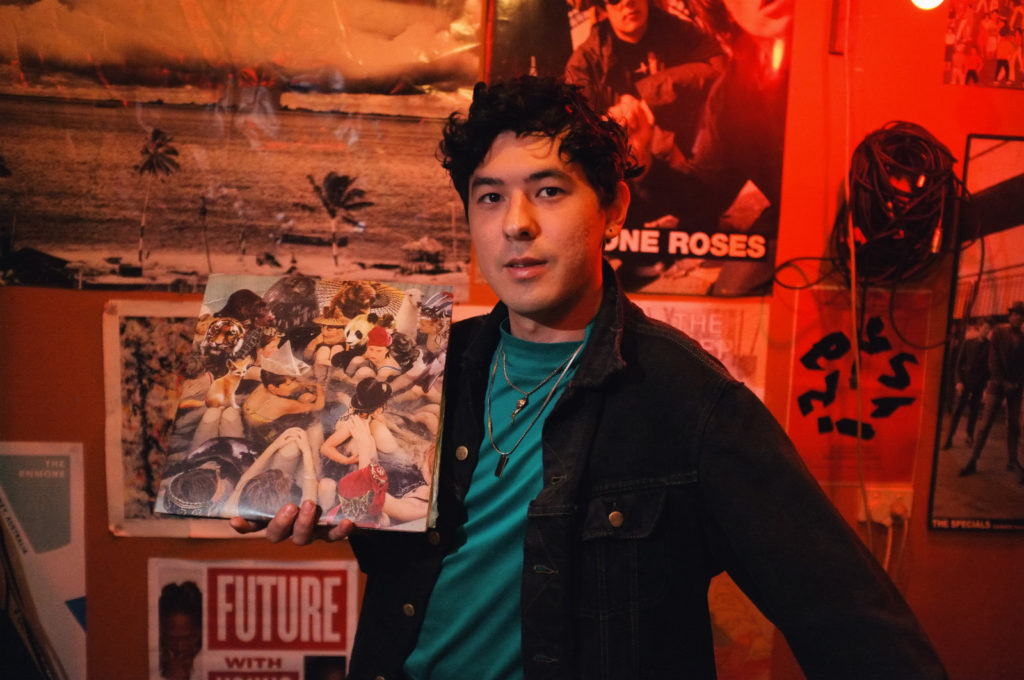 “Jono Ma from Jagwar Ma produced our [Back From The Dead] EP, and when we were driving back from the studio we would be talking about all different bands. One he introduced me to which I am forever grateful for is Panda Bear (Aka Noah Lennox from Animal Collective). Jono chucked it on in the lounge room as I went to sleep, I was totally wrecked and my eyes were heavy but I was absolutely mind blown by the sounds of this album. I had never (and still haven’t) heard anything like it before!”

“It’s funny ’cause the vocals are kinda the same innocent style as the Beach Boys, even in the production. Perhaps that got me at the start, the super melodic but structured vocals. Underneath all of this is just a mish mash of sounds from something like a dream. Everything is looped and I mean everything because he has somehow managed to includes sounds of water hitting pavement, dirt trickling down a hill, lions roaring etc. It sounds absolutely mad because it is, but it still sounds fantastic.”

“This album had been regarded as the most influential albums of the last couple of decades and potentially the catalyst for the genre of Glow-fi or dream pop. Washed out and Toro Y Moi were heavily inspired by this album. I was too, and I think about it like this; Panda Bear threw his rock so far out of the circle that he redefined the barriers of what is acceptable in ‘indie’ or ‘alternative’ music. He managed to create something so bizarre but beautiful that it made the rest of us think “alright well anything is possible now”. For that Noah, I thank you. Oh, and I have listened to this one about 4000 or more times. Twice a night for many years. No time to explain.” “It’s not often you find music that you love by clicking a link in an email newsletter. This was the case for Pop Negro. I saw the picture of Pablo and decided to click it because it was a cool picture with lots of gold records behind him. I was very surprised to discover a track that had this infectious steel drum melody and a great syncopated beat. This song was a huge inspiration for the band and was the soundtrack to multiple summers. Still takes me back these days.”

“His first album is in my opinion very similar to Person Pitch. The vocals are hypnotic, melodic and repetitive just like panda bear with some interesting loops underneath. This album is a bit more musical and has a lot more bouncy synth and cute little melodies. It’s all sung in Spanish which is what inspired my brother to learn Spanish. We went to an El Guincho show in Brisbane a while back and we sung every word, or our interpretation of every word. Must have been funny for him to see a bunch of us mashing at the front singing along haha.” 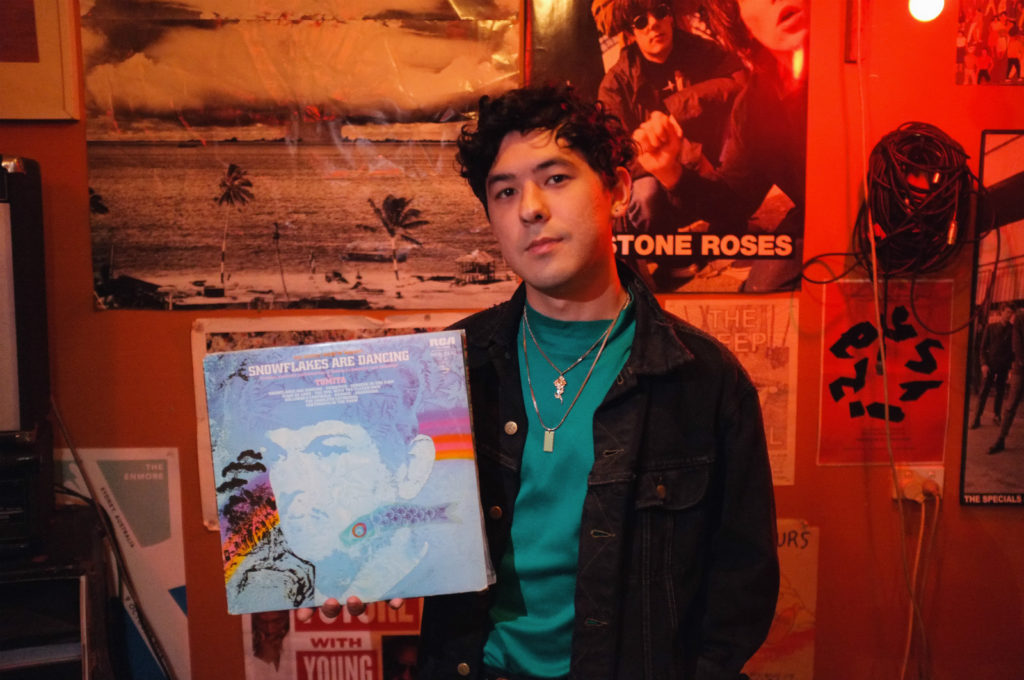 “Tomita is a legend in the old school electronic music world. He was a true pioneer for a lot of techniques and applications of synthesis which essentially kicked off the idea of space music. This album is nothing but absolute beauty in the form of music. It’s basically a bunch of renditions of DeBussy’s ‘tone paintings’. It’s a demonstration of the genius of Claude DeBussy’s compositions and Tomita’s god-like skill in the synth department. It’s an album that gives you goosebumps.”

“I found this one at work (rocking horse records). It was in the sale section, sometimes I grab random records to take how to check out. This one was like hitting the jackpot. At the time, I was really getting into cheesy synthy albums like ‘for beginner piano’ by a band called Plone. They were one of Warp records’ first signings. It’s a funny kiddy little album with very funny sounding synths at times. I like that stuff though.”

“Oh, one fun fact – Will I am sampled a track from this album for the latest black eyed peas song. Also, one more fact, this album was nominated for 4 Grammy awards when it came out. Which I find surprising considering it’s not very pop.” 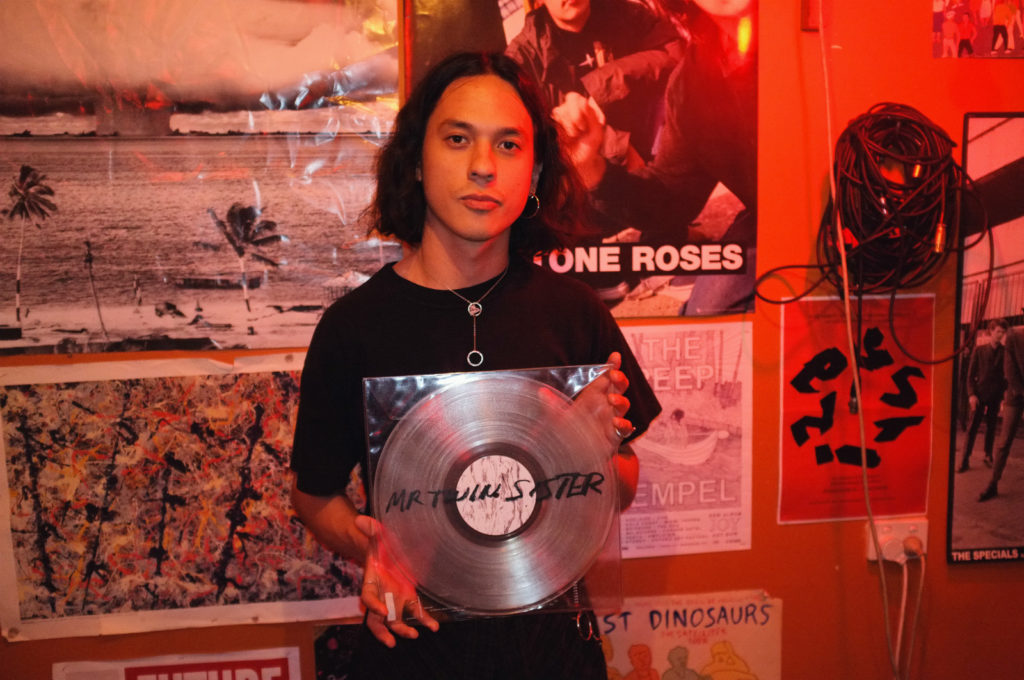 “This band is one of my favourites and a big inspiration for me. Their debut album was how I got hooked. I’m choosing this one as a favourite ‘record’ because it also looks super cool. All clear vinyl with a clear sleeve. So good!”

“This one is super funky. They started out rather folky back in the day but discovered this more 90’s dance kinda vibe which I totally dig. Really inspired me to write more dancey tracks for a little bit before I realised I should stick to rock haha. The singer has the smoothest voice on the planet, and the instrumentation is unique. The guitar player plays his guitar upside down, not even strung upside down just literally grabbed a guitar and flipped it because he’s a lefty. He’s got a cool style.”